Longtime West Homestead police officer Herb Strobel believes that police in Democrat-run cities who have seen an influx of Black Lives Matter protests should “do nothing but the minimum that is required to not get sued or fired” and to “Let it burn,'' according to posts from a Twitter account apparently linked to Strobel.

The account, @herb_strobel, has several posts that imply police shouldn’t be doing their jobs if they receive criticism or regulation from lawmakers. The account, which has since been switched to private, is described in its profile as “Husband, Father, Friend, Police Officer,” according to screenshots sent to Pittsburgh City Paper. The Strobel Twitter account also has a banner image of President Donald Trump with the caption “my president.”

Requests for comment to West Homestead officials and Mayor John Dindak have not been returned. The West Homestead Police Department did confirm that Herb Strobel is currently a sergeant at the department. West Homestead is a small borough located just south of Pittsburgh across the Monongahela River, and is home to part of a large shopping center and a water park. 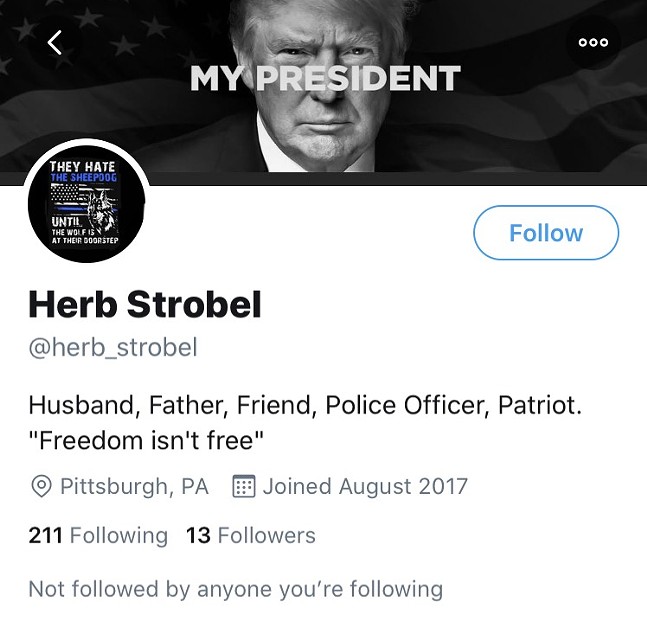 Screenshot taken from Twitter
Herb Stobel's Twitter account profile
The Strobel account tweeted the “Let it burn” comment on July 20. In response to a July 19 tweet from far-right media personality Dan Bongino that claims “Liberalism is a cancer” and “you are in real danger in any area dominated by liberals” attached to a video of empty cans and bottles being thrown at police officers, the Strobel account tweeted, “Open fire!!!”

Dindak is a Democrat, and West Homestead borough council is controlled by Democrats. The borough, which only has about 1,800 residents, voted for Democratic presidential candidate Hillary Clinton in 2016 by a margin of 52%-47%.

Screenshot taken from Twitter
Strobel tweet reply from July 19
There have been dozens of Black Lives Matter protests and demonstrations across the region this summer, but it appears none have been held in West Homestead. In 2018, after the death of Antwon Rose II, a small group of Black Lives Matter protesters blocked the Homestead Grays Bridge, near West Homestead. As a result of that 2018 action, four protesters were arrested.

Sometime last week, the Strobel account responded to a tweet about a Virginia law that would eliminate the mandatory minimum sentence for a simple assault or an assault and battery committed against a judge, police officer, firefighter, and other first responders. Strobel wrote, “These people are going to get exactly what they deserve. Please don’t call us anymore,” apparently implying that people shouldn't seek police assistance because of this proposed law in another state.

Screenshot taken from Twitter
Strobel tweet reply from sometime last week
Strobel also retweeted an Aug. 11 tweet from a pro-Trump account that celebrates a police officer by showing a video of a police officer kicking a man to the ground, placing his knee on the man’s chest, and then tasing a woman. The tweet reads, “This policeman doesn’t mess around. Clone him in thousands & send them to Portland & Seattle.” Both Seattle and Portland, Ore. have had large, ongoing Black Lives Matter demonstrations.


This 👇 Policeman doesn’t mess around!

Clone him in thousands & send them to Portland & Seattle!!pic.twitter.com/J6RsygdCN5