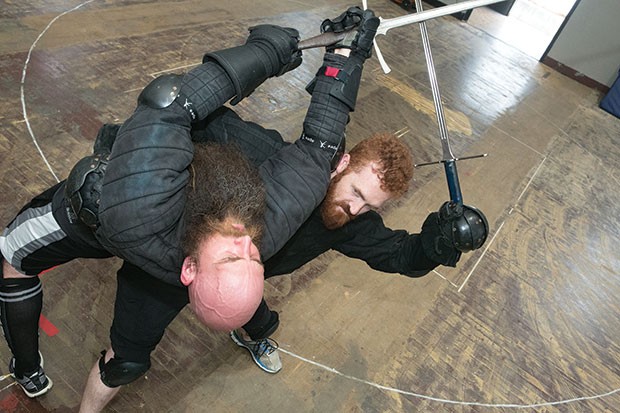 When people watch Game of Thrones or other medieval fantasy shows, sword fights tend to look pretty bad-ass. But ask the martial artists at Broken Plow Western Martial Arts in East Deer Township about the authenticity of the TV fights, and you’ll get one answer: They’re bullshit.

Not that the members, who practice the lost art of Historical European Martial Arts (HEMA), aren’t fans of the show. They just know that the choreographed fights on TV don’t showcase the true nature of medieval sword combat.

Scott Barb, an instructor at Broken Plow, says technique and strategy are key in German long-sword fighting. Strikes can’t be sent willy-nilly at opponents, because an attacker could then become vulnerable to a counter-strike.

“You have to be on offense and defense at the same time,” says Barb. “First thing is to ruin your opponent’s line of attack before you can strike.”

This is the level of seriousness that HEMA martial artists apply to their craft; Barb says Broken Plow has to constantly dispel myths that the club is merely a group of fantasy enthusiasts. When City Paper recently visited the group’s gym, housed in an old church, the intensity was on full display.

Participants clad in padded jackets, protective gloves, and what look like beefed-up fencing masks squared off, first in slow-motion drills and then in full-speed sparring, clanging their three-pound, 50-inch blunted longswords. Participants were working up serious sweats. Gym co-owner Josh Parise, who served with the U.S. Marines, says he teaches his students techniques without weapons first, and that this dedication to the martial-arts components of HEMA is necessary.

“If you don’t know how to use these,” says Parise, gesturing towards his hands, “you have no business using a sword.”

Parise’s background is in taekwondo, the Korean martial art, but he wants to help resurrect the martial arts of medieval Europe, and hopes that HEMA will continue to grow in popularity.

The Broken Plow club has about 100 members, and they practice many different types HEMA, including longsword, rapier (light, thin sword), the short dagger called a Dussack, and sometimes sword-work while on horseback. Parise and co-owner Ben Michels started the club five years ago. While they acknowledge shows like Game of Thrones aren’t necessarily accurate, they have contributed to Broken Plow’s growth over the years.

Says Michels: “We used to have a HEMA group that was just four to six dudes in a park.”