We're seeing Double Consciousness, with art of the Indian diaspora, at The Mattress Factory. 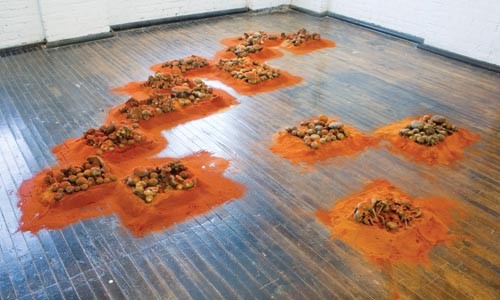 Food for thought: "Untitled," by Sarika Goulatia, consists of chili powder and bronze mushrooms. Photo courtesy of the Mattress Factory.

Within the past decade, South Asian contemporary art has received some long-overdue attention. In 1997, New York's Asia Society organized an exhibition titled Traditions/Tensions, which featured artists from South and Southeast Asia. It was the first major U.S. exhibition to highlight the work of living artists from the region. A year later, the Queens Museum, in New York, mounted Out of India: Contemporary Art of the South Asian Diaspora. The show included the work of artists from India, Pakistan and Bangladesh, the nations that emerged after Britain relinquished power in 1947.

Now, The Mattress Factory takes a look at aesthetic and conceptual developments in Indian art since those landmark New York shows. With Double Consciousness, one of two South Asian exhibitions currently on display, Mattress Factory reveals the perspectives of Indian émigrés who have settled in the U.S. or Canada, and who are continuously reassessing their personal identities in response to the West's cultural hegemony.

Guest curator Vicky A. Clark has gathered the work of eight Indian émigrés on two floors of the museum's main building. While the show's title refers to the two identities each émigré lives with, it also alludes to the sometimes confusing duality of perception and truth: Appearances in these artworks can be deceiving. For example, Allan deSouza's aluminum-mounted C-prints, like "Shadows Cross Madinat al-Salam, 2003" and a piece with the spaghetti-Western-inspired title "Everything West of Here Is Indian Country, 2003," may initially look like arid landscapes and South Asian cityscapes. However, the vistas reveal themselves to be constructions of plastic and Styrofoam. This visual duality suggests that we be vigilant for similar cultural biases and misconceptions.

Exhibition contributors hail from two of the three artistic generations that are said to have developed following India's independence. Saira Wasim, born in 1975, represents the third of these phases. Her meticulously painted tableaux of gouache and ink on paper have the stylistic intricacy of sutra illustrations, but offer a cleverly disquieting mix of secular, religious and multinational iconography. In "Round Table, 2005," Wasim depicts major Middle Eastern heads of state, including Iran's President Mahmoud Ahmadinejad. All are seated around a table that is watched (and perhaps later served) by four inquisitive Ronald McDonalds.

Another "third-phaser," Sarika Goulatia, has produced two sensuously textured installations, both untitled. The first, resembling the powdery swelling of anthills, is comprised of bronze and ground mirchi (Hindi for "chili"). Fourteen of these deep-orange mounds extend, like miniature colonies, over part of the fourth-floor gallery. Inside each is a dense gathering of bronze mushrooms -- alluding, possibly (if somewhat unexpectedly), to one of India's agricultural exports.

Goulatia has constructed a similar work in the museum's basement. Made of aluminum and neel, a inorganic blue pigment, it is arranged much like its mirchi counterpart. However, with its visually arresting cobalt powder and gleaming silver centers, it is that other work's color-wheel opposite, and plays in cool contrast to the mirchi's decidedly warmer hue. Perhaps the visual and material duality refers to India's two sides: the country's supposed earthy, almost Bronze Age status and its rapid expansion into the engineered, postindustrial economy.

In Double Consciousness, each of Clark's eight chosen artists deals with the multivalent issues of identity, perception and their inevitable connection to international politics, while also exploring innovative media and aesthetics. These distinctly individual vantage points (and their articulate visual expression) can facilitate serious cultural debate and reflection. Meanwhile, by highlighting contemporary Indian art a decade after its first appearance in an American museum, The Mattress Factory offers a vital forum for the creative voices of the South Asian diaspora.