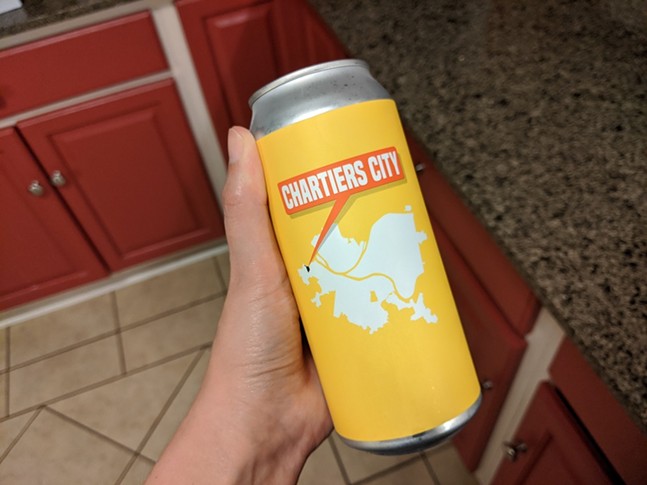 CP photo: Amanda Waltz
Chartiers City pilsner by East End Brewing
Saying "it's been a real one" is an understatement, and it's a wonder that our brains are still functioning after being constantly jerked between the anxious restlessness of COVID-19 restrictions and the despair and rage of our current societal upheaval. To keep going, sometimes we need a respite, a break from the news cycle, a moment of dumb, pointless amusement.

The beer bread recipe comes courtesy of a Salon article boasting the seemingly practical notion that beer is a great bread ingredient because it already has yeast in it, making the pantry staple unnecessary in this case. I was surprised to discover the internet is lousy with beer bread recipes, including a pumpkin bread made with the seasonal pumpkin ale, as outlined in this 2012 Slate post.

Before you prepare for a trip to the supermarket, know that the Salon recipe calls for only three ingredients: 12 oz. of Cold Beer, 2 1/2 cups of AP Flour, and 2 1/2 teaspoons of Baking Powder. That's it. Simple, right? Surely even I, a disaster in the kitchen whose attempts at baking bread could be best described as “disheartening,” would be able to do this. Surely it won't be so disgusting that I end up tossing it outside as an offering to the raccoons that loudly fight on my patio.

Since the recipe doesn't call for a specific type of beer, I used what I had on hand, a 16-ounce can of the Chartiers City pilsner released as part of East End Brewing's YOU ARE HERE series. From there, the preparation was simple – mix the dry ingredients together and then slowly add the beer, gradually folding it in and stirring with a silicone spatula. The mix turned out wet and a tad sticky but was easy to slop into the baking pan.

CP photo: Amanda Waltz
Beer bread in its final form.
After 45 minutes baking at 400 degrees, the result came out looking somewhere between a quick bread and a dark, crusty wheat loaf, complete with cracks on top (next time, I'll be sure to cut slits beforehand). The texture was soft and oddly crumbly, making it a bit difficult to slice when it was still warm – it definitely started breaking apart under my bread knife.

The taste and feel are distinctly reminiscent of a soft pretzel, which makes sense given the maltiness of the beer. Upon taking the first bite I wondered if it was possible to shape the dough into balls for quick pretzel buns. I also wondered if it would be worth letting the dough proof for a bit before sliding it into the oven.

Overall, the bread doesn't keep that well and was gummy and tough by the next morning, so unless you want a good soup dipper or some really weird toast, I'm not sure how satisfying it will be. At least the raccoons will eat well tonight.