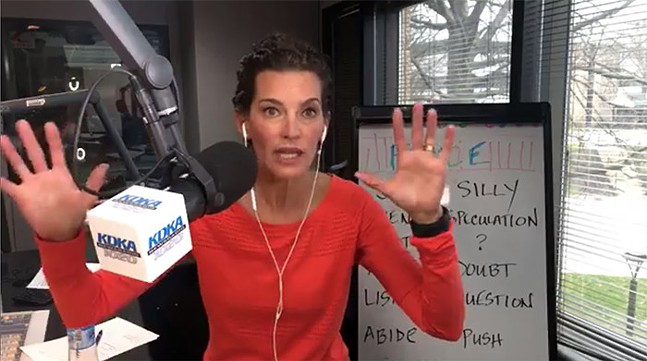 Screenshot from Wendy Bell Radio's live Facebook video
UPDATE, 10:50 a.m., Fri., April 10:
On April 10, the Original Mattress Factory announced that it has decided to pull its advertisements from Wendy Bell's show on KDKA Radio. An advertisement for the company was played after Bell's segment aired on April 5, where she questioned if it was worth shutting down many parts of the American economy to avoid millions of Americans dying from coronavirus. (Full story below).

In a tweet, the Cleveland-based company announced that it does not agree with Bell's statements. It said the company sponsors the entire station, but spoke to KDKA Radio about removing ads from Bell's program. Original Mattress Factory has 10 stores located throughout Pittsburgh. It's unclear if the Original Mattress Factory will pull advertisements from KDKA Radio entirely.

As with all of the radio stations we advertise with, we sponsor the station, not any particular show or host. We have spoken with the station about removing our ads from her program.

On Sun., April 5, Wendy Bell gave a monologue on her KDKA radio show similar to what some other right-wing radio hosts have espoused. She questioned if it was worth shutting down many parts of the American economy to avoid millions of Americans dying from coronavirus.

“They need to shut down the economy? There’s a cost. Everything shuts down. But to what end?” Bell asked during her show. “Yes, every life lost is one too many. Yes, that is the 'talking point,' that is what we are going to say. But, ultimately dollar and cents boil down to, are you going to bankrupt America and the future for less than 1% of our population? Many of whom are already ill, or aged. I am on the fence. Do you see?”

People vulnerable to negative health effects from COVID-19 include the elderly, those with autoimmune disorders and compromised immune systems, as well as those with respiratory issues, like asthma. More than 25 million Americans have asthma.

If 1% of the U.S. population were to die from COVID-19, the country would lose more than 3.2 million people. Economic experts have said such a large population loss could still result in a powerful negative effect on the U.S. economy.


"Should we bankrupt our country for 100,000 or even two million lives?" Bell asked on her show.

Wendy gave me advice as I was coming up in the industry, and I’ll forever be grateful for it.

But this? This is just....sad. What in the hell happened to the once-proud @KDKARadio? What happened to her?pic.twitter.com/52HdsqxwBg


Some people on social media incorrectly assumed that Bell worked for the KDKA television station, and KDKA TV went as far as pointing out that Bell doesn't work for them, repeatedly directing people to the radio station. A request for comment to KDKA program director Jim Graci went unanswered.

WESA producer Kiley Koscinski formerly worked at KDKA radio and said Bell’s comments don’t live up to the storied history of the station.

“It’s an embarrassment for the good journalists that still work there and for Pittsburgh,” tweeted Koscinski. “Shame on you Wendy Bell.”

I’m proud to have cut my teeth at KDKA, the world’s first commercial radio station. A historic Pittsburgh news outlet. But this does NOT live up to that history. It’s an embarrassment for the good journalists that still work there and for Pittsburgh. Shame on you Wendy Bell. https://t.co/bUeBuvOq91


In a longer video of Bell’s program posted on Facebook, she goes on to compare the closures in response to the global pandemic to “socialism.”

Coronavirus arrived in the U.S. in late January and has spread exponentially in the U.S. starting in mid March. There are more than 417,000 positive cases and more than 14,000 people have died because of the virus. In Allegheny County, there are 720 known cases and 10 deaths.

Health experts have said that Allegheny County’s proactive efforts at sheltering in place and social distancing may be helping to lower the county’s relatively low number of cases compared to other large counties.

Last week, other comments Bell made were cited in an FCC petition from the media group called Free Press. The group cited Bell for comments she made on March 19 that compared the COVID-19 pandemic to the 2009 H1N1 swine flu pandemic. Bell said then she believes the news media was hyping coronavirus out of dislike for President Donald Trump. Free Press called her comments dangerous disinformation.

First, I have to apologize for giving Wendy Bell the benefit of the doubt in the past. I had no idea she was this bad! I've never seen her in action or listened to her talk show. This is Quinn & Rose level nuttery. Who is the audience for this crap? https://t.co/iYQRlVc7KF


This is not the first time Bell has been in hot water over her comments. In 2016, Bell was fired from her anchor job at WTAE after she made racist comments following the Wilkinsburg mass shootings, where five Black people were killed.

Before police released any information on the perpetrators, Bell alleged, without evidence, on social media that the shooters were “young black men, likely teens or in their early 20s” and that they had "multiple siblings from multiple fathers and their mothers work multiple jobs.”

She responded to that criticism with an anecdote in which she told a Black busser at Cheesecake Factory he was "going to make it."

Bell was hired by KDKA radio in December of 2018. Since then, she has come to the defense of sexist cartoons drawn in the Post-Gazette and lobbed stereotypical insults at working dads.

"We do advertise on KDKA but do not advertise specifically on that show," said Gardner. "OMF is fully cooperating with all of the mandates that the state government has come out with and we are currently closed."