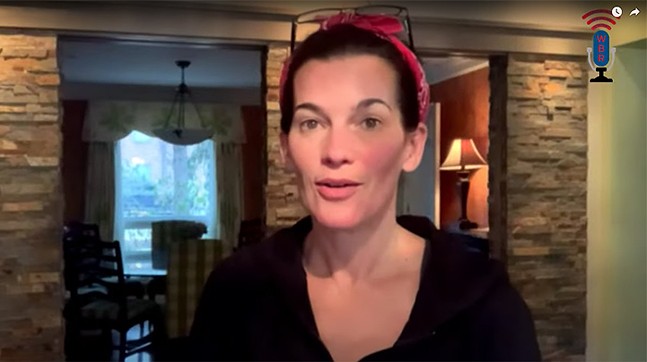 Screenshot taken from YouTube
Wendy Bell
Less than five months after landing a new radio gig at WJAS-AM Pittsburgh, controversial media personality Wendy Bell has once again been taken off the airwaves.

Bell was hired in January by WJAS, a broadcasting station owned by St. Barnabas Health System, a retirement and assisted living community located in Pittsburgh’s North Hills. In a statement made to the Pittsburgh Post-Gazette, WJAS pulling Bell off the air was a “personnel matter” that is being handled within the company, according to St. Barnabas Health System spokesperson Michele Bradac.

Bell being removed from WJAS is the third time since 2016 that Bell has been taken off the air by Pittsburgh-area media companies. The former WTAE anchor was fired in 2016 after she posted a racist message on Facebook about the Wilkinsburg mass shooting. In September 2020, Bell was taken off the air from her radio host position at KDKA Radio following comments she made on air advocating for park rangers to shoot protesters, when she was talking about demonstrators protesting Mt. Rushmore in the summer of 2020.


BREAKING! The end is near for Wendy Bell.
WJAS @stbarnabashs pulls Radio Karen broadcasts from Facebook. Trying to convert those rapidly declining Facebook viewers (barely hitting 2,000 per day) to listeners on AM RADIO!

Starting Monday. Turn that dial and adjust the antenna. pic.twitter.com/rOoeRmerUJ

Ever since losing her job at WTAE, and a brief stint attempting to start a lifestyle website called Positively Wendy Bell, the former TV anchor turned to the world of far-right media, including sharing conspiracy theories and losing advertisers for statements showcasing ambivalence about millions of Americans dying from COVID-19.


For a time after losing her job at KDKA Radio, Bell continued to host a show on her Facebook page, which accumulated tens of thousands of viewers, but her account was banned from posting videos for spreading misinformation. And even though WJAS claims it was a personnel matter as to why Bell is now off the air, Bell continued to get into trouble on Facebook,

In March, she was flagged by the social media company for spreading misinformation about the coronavirus vaccine, and then again for the same reason in April. In some replies on Facebook to the news of Bell no longer being on the WJAS, some users shared their disapproval and used hashtags related to the QAnon, the far-right conspiracy theory that believes Democrats are running underground pedophile rings and eating babies.