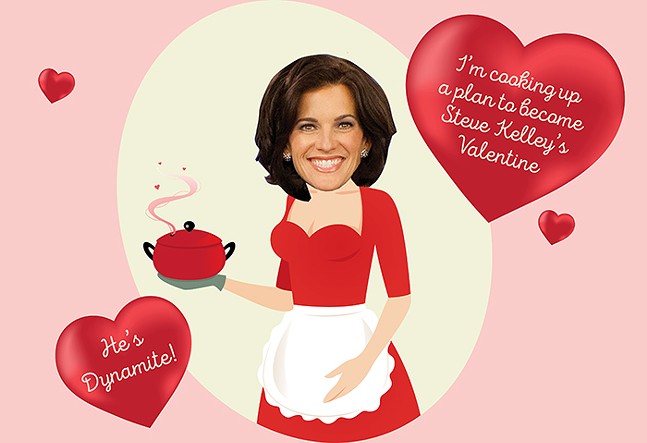 Love is in the air, and no more so than between KDKA radio personality Wendy Bell and Pittsburgh Post-Gazette cartoonist Steve Kelley.

Bell released a video today in which she said the best thing about subscribing to the Pittsburgh Post-Gazette was Kelley, who last month came under criticism for drawing three sexist cartoons within a week. The most offensive depicted a straight couple at a fancy dinner. The woman says, “As a modern woman, I'm all for eliminating traditional gender roles, at least until the waiter brings the dinner tab …”


If you liked Wendy Bell’s tweet from this week, you’re going to love the Keith Burris approved cartoon in the @PittsburghPG this weekend. pic.twitter.com/e5Gy2yPGbv


For some reason, Bell decided it was time someone stood up for Kelley.

"What makes my subscription to the Post-Gazette worthwhile to me is the cartoonist Steve Kelley," said Bell. "He's dynamite. His things are hilarious."

She then goes on to claim that some of Kelley's cartoons are "pro-liberal" or "pro-Trump" or in the middle, making mockery of it all. Bell criticizes the people that dislike Kelley's cartoons, saying they are mad because Kelley is "too conservative."

"They are outraged," said Bell. "They are upset. They are boycotting the Post-Gazette and trying to smear this guy's name and take away his job, ruin his life."

Bell is pretty obviously trolling. The title of her video is "Why can't we just disagree and then move on?" She is the one bringing up a month-old story that the region has largely moved on from, and then attempts to reignite the controversy. If anyone isn't moving on, it is Bell.


. @WendyBellPgh asks, do we have to try to ruin someone's career just because we disagree with them? Can't we just disagree and move on? https://t.co/l2c6MQv6Y7


On top of that, claiming an award-winning cartoonist is having his life ruined by facing some local criticism is just absurd. Kelley has had a long career working in San Diego and New Orleans before working in Pittsburgh. I think he can handle a bit of heat. In fact, Kelley was fired at is job at the San Diego Union-Tribune over a controversial cartoon, and he has clearly had no trouble bouncing back.

Bell is just doing what she does best (or worst): jumping into controversial subjects and injecting her unwarranted option. This actually cost her an anchor job at WTAE when, shortly after the Wilkinsburg mass shooting, she alleged without evidence that the shooters were “young black men, likely teens or in their early 20s” and that they had "multiple siblings from multiple fathers and their mothers work multiple jobs.”

The timing of Bell's video is interesting too. Several embarrassing and possibly damaging stories have emerged in the last few days about P-G publisher John Block, including accounts of him "going berserk" and allegedly threatening his employees and mistreating his young daughter. Every time the P-G editorial department faces criticisms, calls increase for readers to cancel their subscriptions.

Now here comes Bell, one of the most well-known conservative media voices in the region, defending everything at the P-G. She has clearly picked a side in the battle between Block and the journalists' union. She is siding with Block, not the workers who produce the content that fills the paper.

She says the main reason she loves the P-G so much is because of Kelley's cartoons. She subscribes to a major newspaper for a quarter-page cartoon? Again, she is trolling.

In the end, I guess I shouldn't expect anything better out of Bell. No one in Pittsburgh should at this point.

But management at KDKA Radio should be ashamed of themselves. Not only are they endorsing Bell's troll, but they are boosting someone who doesn't deserve a voice in our media sphere anymore.

I mean, Bell admits in her video that it's hard to do the basic job of a journalist.

"One of the hardest elements of getting back into this news business is having to be in touch with the news," said Bell. "Let's be honest, the news often stinks. And it is hard to get back in the swing, watching it, reading it, and being aware of it."

Why in the world is someone who is annoyed at following the news given a platform to comment on the news?! Thanks, KDKA Radio. There are likely hundreds of eager and willing journalists that will take her spot with gusto and enthusiasm. Instead, you subject us to someone who thinks local news is, as she says in her video, "yadladladla."

Update 2/15: Sources at the P-G who wish to remain anonymous sent City Paper a photo showing a mocking depiction of one of Kelley's sexist cartoons. The cartoon was placed over top the "Shame on the Blocks" poster that the Newspaper Guild of Pittsburgh put up in protest of Block. The cartoon originally said "Maybe one day I will grow up and divorce a man like Jeff Bezos," but the parody version reads "Ew! The P-G has a really super bad misogynistic p'litical cartoonist!" The guild put out a statement condemning the original cartoon shortly after CP reported on it in January. Sources tell CP  the mocking cartoon (shown below) is still placed over the "Shame on the Blocks" sign in the P-G offices.

Allegations of sexual misconduct against a former Pittsburgh Post-Gazette journalist were an open secret. Did the universities he worked for help keep it that way?