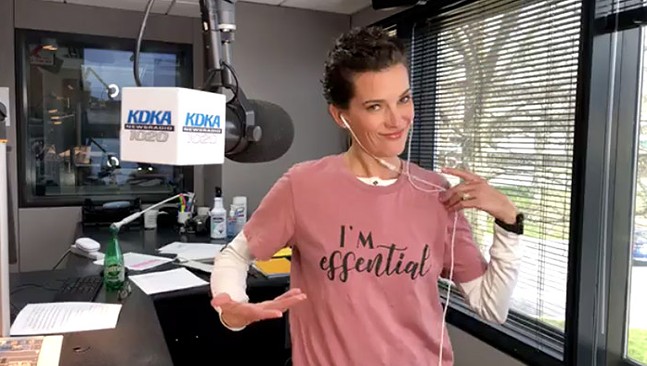 Screenshot from Wendy Bell Live's "Friday Monologue," posted to Facebook on Fri., April 24
A large majority of Pennsylvanians approve of both the social distancing guidelines currently under order in the commonwealth due to coronavirus and of Gov. Tom Wolf's job at handling the pandemic.

But these facts don’t seem to care about Wendy Bell’s feelings.

Despite a recent poll showing only 17% percent of Pennsylvanians think the social distance orders are too strict, and 59% of Pennsylvanians approving of Wolf’s handling of the COVID-19 pandemic, Bell still managed to claim the opposite during an April 24 broadcast of her show on KDKA Radio.

In fact, she went as far as to claim that Pennsylvanians are victims under Wolf’s orders and said that those who disagree with the closures are like the victims of the Benghazi attacks of 2012.

“There is a huge disconnect, Governor Wolf here in Pennsylvania, between you and the people who make up this great commonwealth. You are not hearing them,” she said during her monologue on her KDKD Radio show on April 24. “They are in the trenches, fighting for their lives, and you're not hearing them. You know, it was Sept. 11, 2012, when the U.S. ambassador to Benghazi in Libya, who had asked repeatedly for more security at that U.S. embassy in Benghazi and never received it. His calls never were answered. His requests for help were never heeded. When he was brutally attacked and murdered along with three other Americans and seven Libyans.”

In 2012, four Americans and seven Libyans were killed in an attack on the U.S. Embassy in Benghazi, Libya. The attack was carried out by the Islamic militant group Ansar al-Sharia. Since then, it has become a popular conspiracy theory among right-wingers that former Secretary of State Hillary Clinton and the Obama administration were responsible for the attacks, despite a 2014 investigation by the then Republican-controlled House that said the CIA and the military acted properly.

Regardless, Bell continues with her comparison during her monologue.

“They called, they called for help, they screamed it as rocket-propelled grenades and mortars and thugs with machine guns murdered them brutally,” said Bell. “Their calls were never answered. It was a collective gasp in American history that you could be an American and you could wave a white flag and need help and not have your government comfort you. Ladies and gentlemen, for so many men and women right now, this is that moment for them.”

Lt. Gov John Fetterman says he thoroughly questions the value of “comments so unserious” during a global pandemic.

In a statement, he writes that “50,000 of our fellow citizens have died from this virus-so far. Steps taken by Governor Wolf to drastically contain COVID have saved many lives, and enjoy the support of an *overwhelming* majority of Pennsylvania’s residents.”

Before Bell’s monologue, an ad played that said Bell’s show was being sponsored by local car dealership chain Shults Ford. In a COVID-19 statement on its website, Shults Ford says, “As we navigate through this challenging time, the health and safety of our customers and employees is our primary concern.”

Requests for comment from Shults Ford were not returned by press time.

An advertisement for Shults Ford also played before a Bell segment two weeks ago, where Bell addressed criticism she received for questioning if it was worth shutting down many parts of the American economy to avoid millions of Americans dying from coronavirus.


On Wed, Wendy Bell said a transplant recipient told her she "values money more than his life" about her COVID19 comments. Bell blamed him for having "very selective hearing" & said "I'm not in the business for you to be my friend" @ShultsFord advertised on this @KDKARadio segment pic.twitter.com/SAGib5eBVk

During that monologue, she says that a transplant recipient sent her an email and told her she "values money more than his life.” Bell then blamed that transplant recipient for having "very selective hearing.” She added that “facts don’t care about your feelings” and said, "I'm not in the business for you to be my friend."

Bell's comments about coronavirus have garnered significant criticism, from people on social media and in a report filed to FCC. On April 10, local advertiser the Original Mattress Factory denounced Bell's comments and asked KDKA to remove its ads from Bell's program.