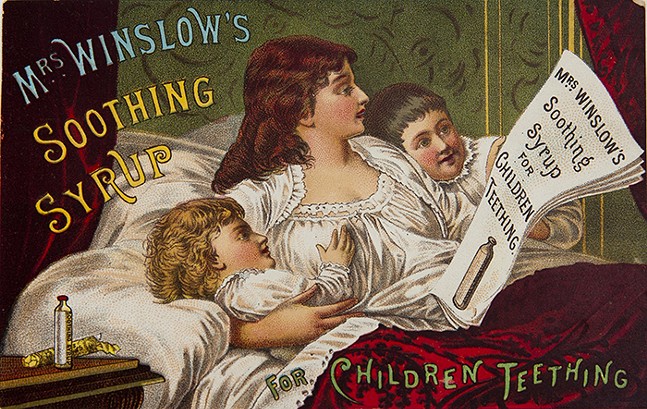 Image: U.S. National Library of Medicine
1885 ad for Mrs. Winslow’s Soothing Syrup
In 2001, a crew working on what was once the Lazarus building in Downtown Pittsburgh unearthed a strange discovery — an abandoned well containing thousands of empty medicine bottles from the Victorian era. The artifacts were analyzed and reported on by a team that included Dr. Jacqueline M. Cavalier, a professor of history at the Community College of Allegheny County.

Cavalier says the project sparked her interest in investigating the patent medicine industry that rose to prominence in the U.S. during the later part of the 19th century. While that topic may seem dry, a few examples she gives, particularly a product for teething babies called Mrs. Winslow’s Soothing Syrup, shows that it’s anything but.

Such is the nature of patent medicine, an unregulated industry that, at its height, made millions with cure-alls and tonics containing the aforementioned morphine and alcohol, as well as opiates. The products, which were never required to reveal their ingredients, were marketed heavily to women at the time, who administered them to their families and children, and themselves.

Cavalier has made this the center of her research, which she will discuss on Wed., March 24 during "A Great Blessing to Women": Tonics, Temperance, and the 19th-Century Patent Medicine Industry, a Women’s History Month event hosted by the Battle of Homestead Foundation.

“I was really struck by how effective the advertising was,” says Cavalier, who also serves as a Battle of Homestead Foundation board member. "Even though women did not have true purchasing power in the last quarter of the 19th century, they had tremendous influence over family and consumerism. They influenced what was purchased, how care was administered in the home. Women and children became a major focus of the patent medicine industry.”

The products were made all the more appealing to women by serving as art objects, with exquisite illustrations and sculpted bottles.

For the last two decades, she has embarked on researching the topic, which has taken her to The Waring Historical Library at the Medical University of South Carolina and the Niagara Apothecary in Niagara-on-the-Lake, Ontario, a historic site preserved to recreate its origins as a 19th-century pharmacy.

Cavalier uses the history of patent medicine to emphasize the power of women as consumers at that time, both in urban and rural areas, as the popularity of patent medicines and home remedies rose with the advent of mail-order catalogs. She says it also demonstrates the power of women as activists, as the Women’s Christian Temperance Union — a group that organized to call for the prohibition of alcohol — suffragettes, and women’s publications took on the industry.

Cavalier cites a 1904 article in Ladies' Home Journal as being instrumental in making people aware of the potential dangers of patent medicine. Titled “The ‘Patent-Medicine’ Curse” and penned by editor Edward Bok, the piece listed the ingredients of various widely available patent cures and called on the Women’s Christian Temperance Union to boycott such medicines due to the alcohol they secretly contained.

“An upstanding middle- to upper-class woman can’t enter a saloon but she can sit in her parlor and put a couple drops of Mrs. Winslow’s Soothing Syrup in her tea and sip on it,” says Cavalier, adding that women would have certainly been horrified to learn what they and their children were actually taking.

Cavalier says that while women were restricted from most professions, they would still carve out influential roles for themselves.

“If you think about it, what we’re looking at is our first group of middle to upper-class college-educated women, and while they can acquire some level of education they’re still kept out of certain fields,” says Cavalier. “They use that education to create the position of social reformer.”

She adds that being a social reformer allowed women some degree of influence while also not “straying away from prescribed or predetermined roles” as caretakers and nurturers. “They’re just becoming caretakers or nurturers of the larger society,” says Cavalier.

She believes this area of the study shows how women, the very group patent medicines were marketed towards, also helped put a stop to it — two years after Bok’s piece ran, the government passed the Pure Food and Drug Act designed to protect consumers by requiring manufacturers to list ingredients.

It also dispels some of the myths surrounding drug addiction, as many people in the Victorian era became unwittingly addicted to patent medicine ingredients.

“When we think about addiction and perceive it and treat it, and how we talk about it, and how it impacts certain groups differently than other groups, we don’t think of this Victorian woman as a drug addict,” says Cavalier.

Still, she says not all manufacturers of patent medicine were ill-intentioned, and many products were harmless, containing mostly water. What’s more, they also may have been a resource for women seeking abortions, with labels for some bottles winkingly reading “do not consume if you are with child or pregnant.” Cavalier adds that women who found the remedies to be ineffective could return to the pharmacist, who would give them a referral to someone able to terminate the pregnancy.

Cavalier says she hopes her research provides a look at a niche area of women’s history. She also acknowledges that, while the patent medicine industry, with its attractive advertising and dubious claims, ended over a century ago, its influence still resonates today.

“Think about watching television, every other commercial now is a drug commercial,” says Cavalier. “In essence, this is was very similar to advertising of the last quarter of the 19th century.”