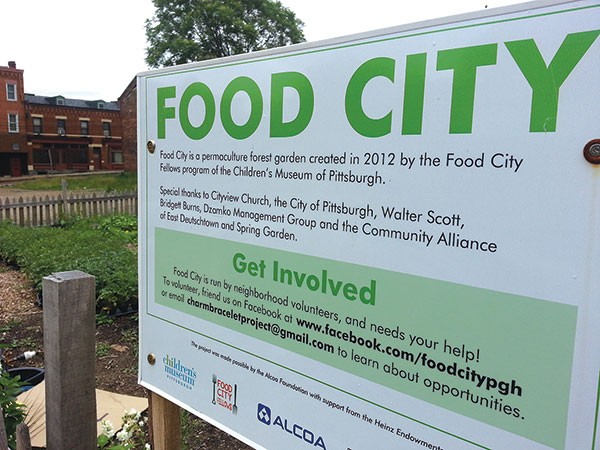 Photo by AmyJo Brown
"Food City," a community garden on Tripoli Street on the North Side

On the North Side, on the border of the Spring Garden and East Deutschtown neighborhoods, about a quarter of an acre of vacant land has been fenced in and a sign welcomes those who pass to "Food City."

A few pepper plants, tomatoes and herbs dot the lot, but the vision of Kim Bracken, youth coordinator at the Pittsburgh Children's Museum, is still a work in progress. With the help of teens hired through the museum's summer job-training program, the land will become a "food forest" — a twist on the traditional community garden that is gaining interest in the city.

But, "a food forest seeks to grow with less work," Bracken says. "[With] most forests, people don't have to tend them. They do their thing."

Another food forest is also in the works in the Hill District, on about two acres near Beelen Street, a project of the People's Garden. Both the North Side and Hill District projects are the seeds of the original — a quarter of an acre of land in Hazelwood planted by Pittsburgh Permaculture four years ago.

"We can be out there every day, weeding and watering. But most people don't want to feel so obligated," she says. "By designing and working with nature, rather than fighting against nature, we don't have to put as much of our personal energy into maintaining our food system."

The design of such a garden starts with fruit trees. Layers are then added underneath with native shrubs and perennials that provide a food or medicinal benefit.

Bracken, walking around the lot on the North Side, says it will take years before the land is self-sustaining. In the meantime, volunteers are working with the museum's teens to nurture it. Next week, the trees will go in: plum, apricot, fig, chestnut and almond. And, she notes excitedly, a plant called soapberry.

"It literally grows berries that you dry and they are soap," she says. "We're planting one of those so everybody can have free laundry detergent."