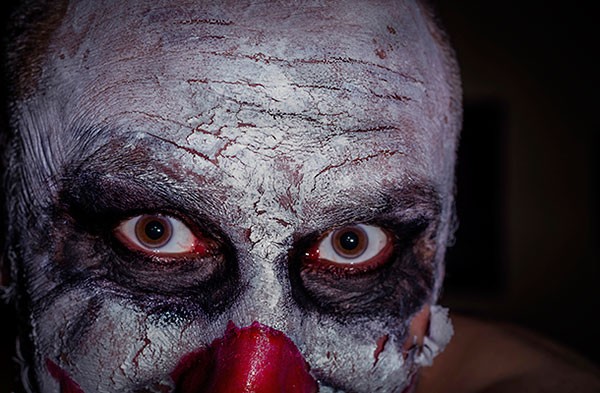 A political organization is protesting in front of the homes of state lawmakers who oppose its single-issue agenda. The Pennsylvania Liberty Alliance is a 501(c)4 group dedicated to the elimination of school property taxes. On IRS paperwork, 501(c)4s are “social welfare organizations,” but because they are not required to disclose contributors, they are often funnels for “dark money,” untraced spending by rich donors to influence politics. The Pennsylvania Liberty Alliance popped up last year when the state legislature considered a bill to abolish school property taxes. It was voted down in November. Group members have since demonstrated at the fundraisers, offices and occasionally homes of Democratic lawmakers who opposed the bill. A post on the Liberty Alliance’s Facebook page shows eight people outside the home of state Sen. John Blake, of Scranton, with a sign warning him, “Don’t Be a Judas.” (A commenter on the photo claims they overheard a neighbor phoning Blake and saying, “I don’t know, but they’re taking pictures on your front porch.”) A crowd of at least 15 came carrying signs to the Dauphin County home of state Sen. Rob Teplitz — or so they thought. Teplitz told PennLive.com a neighboring family was disturbed by a crowd and shouts on its lawn. Pennsylvania Senate Democratic Leader Jay Costa sent the group a letter warning that “further intimidation” will “be treated as criminal behavior and handled accordingly.” James Smith, a lawyer for the group, sent back a letter retorting, “In the fog of your power trip, you may be confusing Pennsylvania with North Korea or China or the Soviet Union of the 1980s.”

Reports of creepy clowns in wooded areas have circulated around the country. Originating in the Carolinas, clown sightings have spread to Maryland, West Virginia and Pennsylvania. A woman in Cambria County reported a clown in a teal-colored outfit peering through her window, according to the Tribune-Democrat of Johnstown. The clown fled after he was spotted. Also, several people in Huntington County reported an individual in a clown outfit to authorities. In a press release, state police asked residents to call them if they “see anyone dressed as a clown on [their] property or along a country roadway.” Westmoreland County, however, is clown-free (for now), despite rumors to the contrary. “Westmoreland County Fire/911 Incidents,” a Facebook page run by several local firefighters (but not sanctioned by any department), claimed that clowns had been spotted in Greensburg. The city’s own Facebook page assured residents, “The City of Greensburg Police Department has had no reports of any ‘clowns’ in our area, friendly or otherwise.” The post urged citizens to “[p]lease refrain from possibly tying up our emergency lines in reference to” internet posts about “rogue clowns.”

Beth Jean Dixon, a 63-year-old teacher at the Cumberland Valley Christian School in Chambersburg, apparently took her gun to work. Dixon allegedly left the loaded weapon in a school bathroom, which was used by four children before she remembered to retrieve it. The firearm reportedly sat atop a toilet tank in the unisex, one-toilet bathroom as kids ages 6 to 8 did their business. A child apparently told a parent about the gun, leading to Dixon’s resignation and arrest on endangerment charges. The Christian K-12 had no policy concerning firearms in the school. After the incident, the school’s president, Rev. Mike Sanders, told The Sentinel of Carlisle that he has temporarily banned them until the school board meets to rule on the issue.

The NFL fined Steelers receiver Antonio Brown almost $20,000 for two odd displays in a game against the Washington, D.C., team with an unrepeatable racist name. After scoring a touchdown, Brown squatted and gyrated his buttocks in what ESPN called a “twerk celebration.” The cost was a $12,000 fine and a 15-yard penalty. Brown also wore baby-blue cleats to FedEx Field, in violation of NFL uniform rules, at a price of $9,000. Brown told reporters there was a message behind his shoes, elaborated on at his website, but a Pittsburgh Post-Gazette writer who searched Antoniobrown84.com couldn’t find an explanation.

A shirtless man pacing on the rooftop of an apartment building in State College prompted an emergency call, reports the Centre Daily Times. Christian Sondergaard, 19 and “intoxicated,” according to police, apparently made his way off the roof, climbing onto a balcony and into a seventh-floor apartment (which eventually lead to felony trespassing charges). He then reportedly sprayed a fire extinguisher at two individuals sleeping on a couch and was emptying the extinguisher off the balcony when officers arrived. 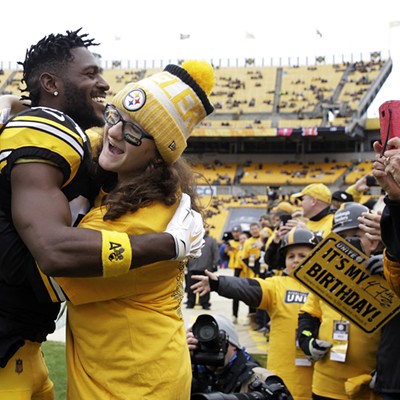