Either the historic building will be saved and there will be no high-rise, or it will be torn down and the skyscraper will be built 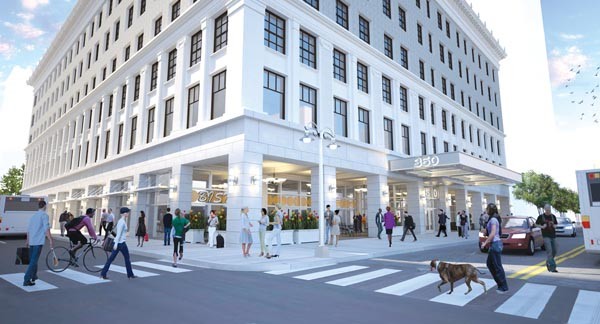 At the beginning of its recent press conference, Oxford Development showed two development proposals (both still currently under consideration) that are so completely different that an onlooker might have assumed each would be built in a different place. And indeed there are two different Downtown street addresses, 350 Fifth Ave. and 441 Smithfield St.

Under one Oxford proposal, a six-story structure of 1918, the former Frank & Seder Department store, would be extensively re-done, but not substantially enlarged. The finished product would provide approximately 200,000 square feet of mostly office space, with retail space on the first floor, all at a cost of approximately $40 million. As shown in the renderings, the building would retain its ornamental program of pilasters, brackets and cornices in its restrained neoclassical style.

The other proposal is a 33-story tower in steel and glass. It has street-side loggias at the ground level and some slightly chiseled inflections, a metallic belt at its mid-section and two colors of windows to mitigate its otherwise-slab-like shape. It is 772,000 square feet of space at a cost of $238 million.

But these are not proposals for two different sites. 350 Fifth and 441 Smithfield are two different names for the same parcel. Either the historic building will be saved and there will be no high-rise, or it will be torn down and the skyscraper will be built. Call it Sophie Masloff's choice.

Aesthetically, it's perhaps too easy to prefer finely honed classical detail over austere steel and glass, but it's hardly a fair comparison. While the Frank & Seder building is at this time a completed (though not yet renovated) structure, the tower proposal is not even a definitive design, but rather an expression of willingness to build a tower. Asked whether the scheme would change dramatically at an anchor tenant's request, principal architect Dennis Astorino said, "Yes, absolutely."

So the aesthetic argument is really apples and speculative oranges.

Importantly, though, the real-estate argument is as well. True, the tower proposal is nearly four times as large, and a larger project has the possibility, though certainly not the guarantee, of greater long-term profit. But at the May press conference, Oxford Development representatives commented that tenants for the renovation proposal were available and willing to move forward. Meanwhile, says Oxford, the tower proposal had no anchor tenant yet willing to sign up for the requisite 40 to 60 percent of the building capacity. And no anchor tenant means no tower. Indeed, while Oxford representatives cite ongoing negotiations, they have announced no signed lease for the high-rise.

Why propose to tear down an historic building at one of Downtown's more prominent corners — across from the Kaufmann's clock, Mellon Bank and the battered but still remarkable Park Building — when you have a renovation plan and interested tenants for its renovated use? And why propose to tear it down for a speculative building that does not yet have interested tenants?

Indeed, the Pittsburgh Post-Gazette reports that the city's Urban Redevelopment Authority is applying for $15 million in state funds to contribute toward the high-rise scheme's cost, or 6 percent of the $238 million price tag.

But those who give historic preservation the priority that others reserve for high-rises can take some relief in the ongoing viability of a Frank & Seder renovation. Arthur Ziegler, president of Pittsburgh History & Landmarks Foundation, says, "We have talked with [Oxford Development] about the architectural value of the building and that it should be in the National Register expanded district in that area that we will be proposing." And this is not a purely historical venture. "They would get tax credits," Ziegler adds.

Actually, the Department of the Interior's standard Historic Preservation Tax Credit is 20 percent of applicable construction costs, which would be up to $8 million on the Frank & Seder building.

Says Ziegler, "They were very interested, and we are to talk again in a couple weeks."

Oxford Development deserves praise for proposing options alongside the scheme that it really wants. And a new high-rise building from them is generally a welcome project. But not at the expense of an aesthetically appealing, historically significant and economically viable structure with substantial economic incentives toward its development.