"I love that fashion can be whatever the girl wants it to be now." 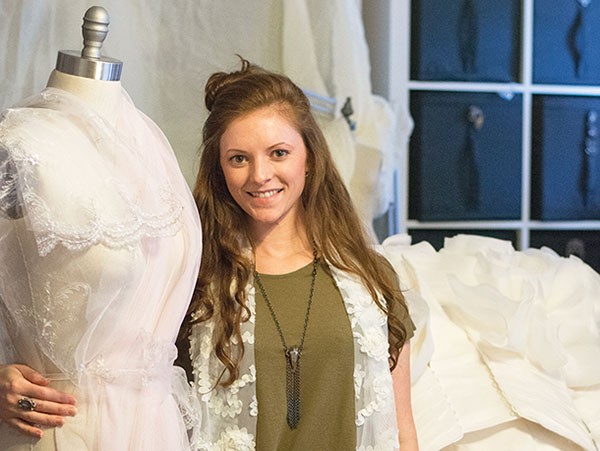 As a fourth-generation seamstress, you could say sewing is in Jen Rocket's blood. The 32-year-old wedding-dress designer first got her hands on a sewing machine at age 5 and has been at it ever since.

"From the age of 3, I was with my mom in her studio begging to get on the [sewing] machine," says Rocket. "She likes to tell the story of how when I finally got on the machine, I lit up and she didn't see me smile like that again until my wedding day."

At Rocket's Highland Park studio, racks are filled with wedding dresses of all shapes and sizes. Some are her original creations; others are store-bought and in need of alterations; Rocket's custom dresses start at around $1,300.

Even though she only opened her studio in 2012, Rocket has gained notoriety as a go-to seamstress for wedding alterations and custom gowns. Surprisingly, though, she says she never had her sights set on the wedding industry.

"I always thought, 'Why would I do wedding gowns? It must be really high stress,'" says Rocket. "But after I made my wedding gown, it was just abundantly clear that there was magic in this."

That dress was a pink satin gown with a detachable ruffled train. It was inspired by a 15-year-old Vogue pattern she discovered years ago.

"I saw the design and something sparked," says Rocket, who's been married for four years. "The night I was engaged, I ran to my studio and pulled that pattern out and I knew it. That's the feeling you want."

It's a feeling Rocket sees often when brides visit her studio for dress fittings.

"Some girls are very emotionally attached to their dresses and the closer we get to the final fitting, the more excited they get," she says. "There's so much feeling that goes into a wedding gown. Whether it's a big puffy cupcake dress from David's Bridal or a chic bohemian soft creation from one of the designers at Glitter and Grit. It can be life changing."

But in the age of websites, like Pinterest, that let users collect wedding inspiration for everything from dresses to color schemes, holding on to that feeling can be difficult. Today's brides are constantly bombarded with images of dresses, and Rocket advises brides to steer clear of such sites after they've decided on a gown.

"Try not to have dress envy," Rocket says. "To this day I still know [my dress] was the right one. Here I am working on dozens and dozens of gowns and living in that space online where I'm seeing all of them, but I'm never jealous."

Another piece of advice for budding brides: Don't be too concerned with trends and customs.

"I love that fashion can be whatever the girl wants it to be now," says Rocket. "It depends on the girl and I love that. I don't think there should be any rules."