“We’re a technology company with food as its muse.” 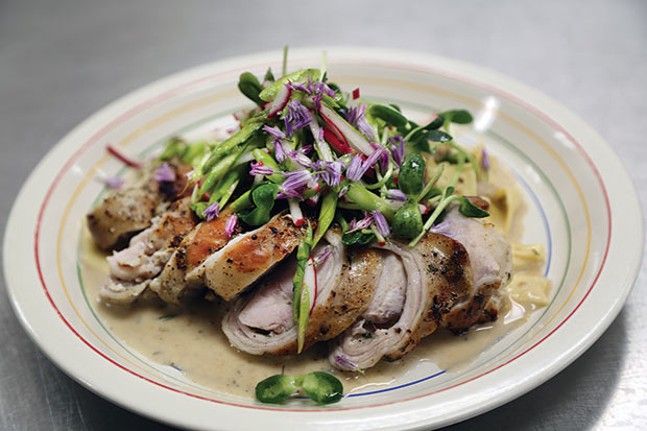 The age-old debate between friends and lovers of where to go out to eat may be solved with a new online service called chefs.cloud. Pittsburgher and technology consultant John Clifford founded chefs.cloud in 2016 as a way to help diners find more of what they want in restaurants. “We’re a technology company with food as its muse,” says Clifford. “We’re looking to find new and interesting ways to introduce technology into the decision process of ‘what do I eat next?’  It’s the fun thing that we’re working on that I’m getting a lot of help with.”

Chefs.cloud is a passion project that Clifford hopes to move into his full-time work. Currently, it exists as a YouTube channel with a set of one-minute-long videos of dishes being made and explained by Pittsburgh chefs. Pittsburgh filmmaker David Bernabo, known for his Food Systems film series, is behind the camera, bringing some of his signature style to the shorts. Thus far, videos of dishes include those made by area chefs such as Sonja Finn, of Dinette; Justin Severino, of Morcilla and Cure; and Curtis Gamble, of Station, among others.

The website, which is in development, will feature menus of Pittsburgh restaurants, on which all of the ingredients of a dish will be listed. The menus will be searchable by ingredient, allowing the user to filter according to personal taste and dietary restrictions. Users will be able to privately rate dishes they’ve eaten, which will allow the database to generate information about each user’s palate. Users will also be able to see past menu items prepared by a particular chef or restaurant, and get a feel for the type of experience they might have. “There are 5,000 things that you could have for dinner in Pittsburgh tonight, if you were going to go out. How do you discover the new things? How do you find things that are going to be good for you? I have Crohn’s disease, so I have to figure out where and what I can eat,” says Clifford.

Being diagnosed with Crohn’s, an inflammatory bowel disease, in his late 20s was part of what inspired Clifford to create chefs.cloud. “After I was diagnosed, I had to re-teach myself how to eat,” he says. He spent a lot of time and energy figuring out what and where he could eat without causing a flare-up. As he navigated this path, he became more interested in the growing Pittsburgh economies of health care, food and technology. Now, Clifford hopes that chefs.cloud will combine these interests in a way that will serve others.