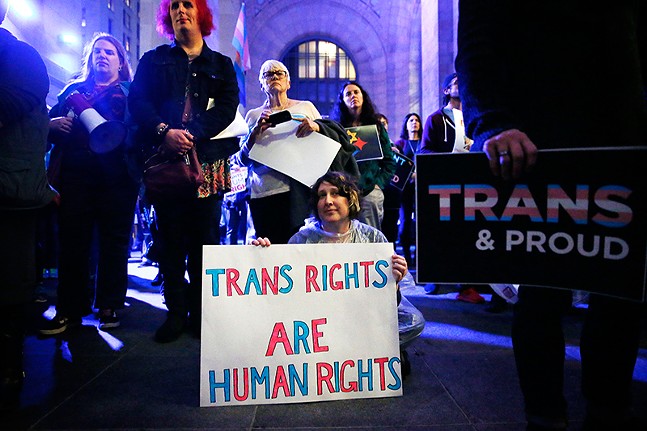 CP Photo: Jared Wickerham
Trans rights rally held in Downtown Pittsburgh in 2018
Pittsburgh City Paper joins the city in celebrating Trans Day of Visibility, a national event designated by the White House as calling on Americans to “join in the fight for full equality for all transgender people.”

What does this day mean to Pittsburgh's trans community? City Paper asked some of our trans friends and neighbors to share the significance of Trans Day of Visibility in their own words, and how Pittsburghers can support trans people throughout the year.

What does Trans Day of Visibility mean to you?

I think the word "visibility" means different things to different people, and it can often be a privilege to be visible. To be out of the closet is one thing, but to be seen and perceived as who you authentically are is another thing. Who are we being visible for? Oneself? Other trans people? Cis people? A mixture? For me, visibility is an ever-changing journey and TDOV has looked different every year since I have been out of the closet. As one of my favorite trans activists and writers Zeke Smith said, 'As time passes, some have the privilege of shrinking from visibility to develop the whole of ourselves. And when that is done, it can be yet another chance to grow by being visible for others.' I think I am embodying that in my relationship with visibility and transness."


"TDOV is an opportunity to celebrate the beauty of the trans community. The traditional trans narrative we see in popular culture focuses on trans pain, suffering, and death, when so much of being trans is about joy and love!"


"Trans Day of Visibility is a celebration of trans people and defying the pressure to hide or minimize ourselves. On a day-to-day basis, I experience pressure, whether intentional or not, to tone down my trans identity or to fit into a binary gender mold. I have been through a lot to get to a place of comfort and stability in my trans identity. I spent a lot of time feeling not trans enough because my story of coming out as nonbinary later in life didn't always look like what I had seen in the popular and more available narratives. Part of what made the coming out process so arduous was not seeing examples of people like me, with transitions like mine.

Trans Day of Visibility is a way for us to see us, celebrate our lives on our terms, and experience the joy of being trans. This year for me, TDOV is an opportunity to be unapologetic for and proud of my pathway to trans identity."

How can Pittsburgh folks support their trans friends and neighbors on the local level?

"Similar to the last TDOV, this year we are facing a deluge of anti-LGBT legislation, specifically anti-trans legislation. This is an existence I know all too well. When I was in high school in Charlotte, N.C., North Carolina passed its infamous 'Bathroom Bill' (HB2) that stripped away protections for transgender people throughout the state. I learned then that visibility came with a price, often a violent one — both internally and externally. It is important to fight these bills and combat this violence every step of the way — regardless if you’re in a state that has passed these bills or is just considering them (that includes Pennsylvania).

Call your state legislators and tell them to protect trans people, trans youth, and trans people of color; ask them to not vote on any legislation that would do otherwise. Call your U.S. Sen. Pat Toomey and ask that he vote yes on the Equality Act, a bill that would guarantee federal non-discrimination protections for everyone regardless of gender, gender identity, or gender expression.

Lastly, donate your time and money to LGBTQ+ organizations. Hugh Lane Wellness Foundation, Project Silk, and SisTers PGH are but a few organizations in the Pittsburgh area that uplift and protect trans people. The ACLU and Human Rights Campaign are fighting anti-LGBTQ bills and working hard to pass pro-LGBTQ bills. The more we are visible, the less we can be rejected."


The best way to support trans members of the Pittsburgh community is to listen and do your best to respect them even if you don't understand. Trans people have done so much introspection and unpacking of their identity, and have had to make really difficult decisions regarding medical transition and gender expression. Trust that they know more than you about their gender, and listen and correct your behavior if you are called out. Perfection isn't everything, and it makes a huge difference to try and make mistakes than to not try at all. If you're not sure how someone would like to be referred, just ask!


"I think educating yourself is a big first step, not adding to the critical mass of transphobia that comes from lack of awareness. Challenge yourself: actually considering your own gender identity can be a helpful way to re-evaluate the basic assumptions you have about gender and transness that can harm others, trans or not. Tune into the local conversations happening, the local organizations working for the benefit of trans and gender-nonconforming people, see where you can serve with your time, money, energy, special skill set, etc.

There isn't just one way to help. Show up for your trans friends, coworkers, family members in conversation and actions; be aware that in cis-dominated spaces, we are often fighting alone and could use the extra muscle. Importantly, trans experiences are varied; listen especially to the voices of queer, trans People of Color within the community. Practice the humility and courage to learn; find your own ways to keep your stamina in the struggle for your trans neighbors, even after mistakes and missteps. We need your help."