We interview local magicians ... and come away with dating tips.

"Learning to think on your feet is an important skill that people could take from a magician." 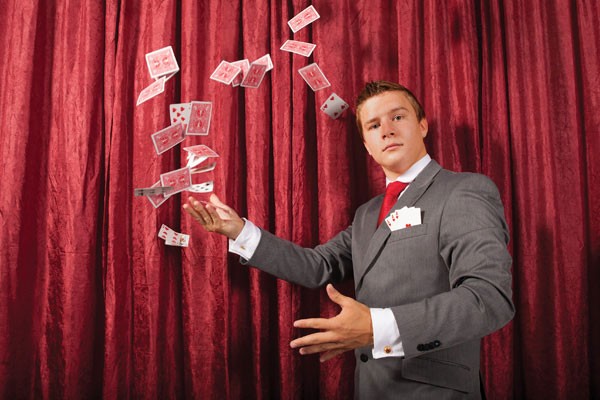 Photo by Heather Mull
Is love in the cards? Perhaps magicians can offer some advice.

Even in this age of ubiquitous digital technology, magicians are appearing everywhere, from stage illusionists on national TV to the card trickster at your kid's birthday party. But while you might regard magicians as anything from glamorous to dorky, perhaps the last thing you'd ask them for is dating advice.

Yet such advice is one thing I gleaned from recent conversations with three magicians representing a cross-section of the local (and admittedly male-dominated) magic scene.

For instance, one local tuxedo-clad magician contends that, in dating as in magic, the real trick is self-confidence. "Performing has given me a lot of confidence in social interactions," they say. "Most performers in general are a bit introverted, but when they perform they take on a different personality, like an amplified version of themselves. I'm more low-key when I'm not in that setting, but it's shown me that I have the potential to be more ‘out there.'"

For the past eight years, they have performed his table-side magic at restaurants. They add a modern spin to classic magic tricks like vanishing an item into thin air, or working magic with a deck of cards.

"Learning to think on your feet is an important skill that people could take from a magician," they say. "In a close-up setting especially, so much can go wrong. There are so many variables at play that you're constantly changing what you do and say in unique situations. You can plan all you want, but you have to ebb and flow to adapt to the situation at hand."

Indeed, just ask Al-Mazing: The laid-back card-trick specialist, who often does street-corner magic, once had a client try to pay for a show with drugs instead of cash. Another time, during a sidewalk show, a homeless man urinated into his bag of props. Both are things that probably never happened even on your worst date. But instead of throwing in the magic wand, Al-Mazing simply moved on to the next trick.

How else to stand out from the crowd? Grand illusionist Aedryan Methyus seizes attention with lavish stage productions — and for better or worse, some effects spill over into his dating life. Onstage, Methyus delves into darkness, with tricks like his Zombie Sphere, a small metal object, filled with "spirit energy," that he makes appear and disappear. From sleight-of-hand to psychic predictions, Methyus plays upon the bizarre and unexpected for his corporate clientele.

Sometimes those experiences enter his personal life in awkward ways. For instance, there's that moment of stunned silence when someone sees his home for the first time. "The inside of my house is like the red room from Fifty Shades of Grey, so it can be a challenge when I bring a woman home," he says. "It's always difficult at first as I try and explain they are things I use for work."

Methyus isn't trying to channel his inner Christian Grey. But his collection of chains, blades and metal contraptions are definitely not items found at the local Kmart.

As to whether a magician should actually do magic on the first date, these performers differ.

"Magic gave me the confidence to approach my wife, but because of my personality, [magic] wasn't needed," says Al-Mazing. "Rather, read [your date's] palm or fortune. They like that better than magic."

The first magician we spoke to, however, says, "I have used magic on dates! I think the biggest thing is that it's just very unique! I mean, how many dates do people go on where the other person pays for the check with money they just conjured out of thin air?"

"It reminds me of peacocks," they add. "The most unique, interesting and colorful males get the females. The same applies here."

This story has been updated on Feb. 15, 2022 to remove the name of one of the magicians at their request for privacy reasons.