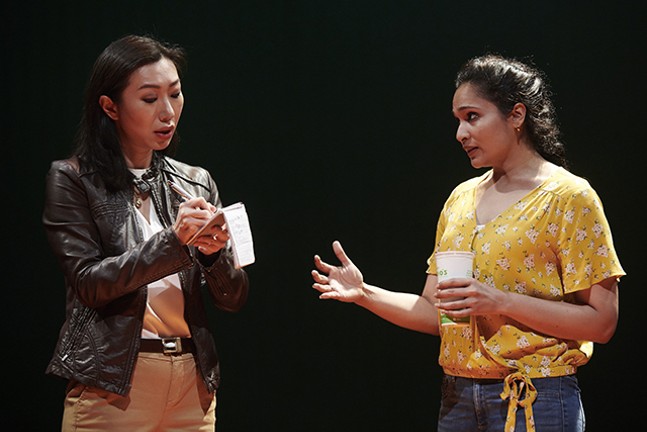 Photo: Kristi Jan Hoover
Jo Mei and Nilanjana Bose in We Are Among Us

"Two disparate lands irrevocably linked by a close to two decades old conflict," Drobot writes. "We Are Among Us explores the inherent cost of war by tracing the ripple effects of a single night in Wardak Province, a remote area southwest of Kabul, highlighting our country's intertwined relationship in the process."

The essay is well-written, informative, restrained, and nuanced in all the ways that, unfortunately, Stephen Belber's script for We Are Among Us is not. A game cast and a rich subject aren't enough to save the play from its worse impulses, which are alternately heavy-handed, cheap, and patronizing. The production isn't completely without bright spots, but mostly I found myself wishing that I was just reading more of Drobot's history.

Its plot revolves around five people connected by the aforementioned "single night in Wardak Province." Eight years earlier, Laura (Lisa Velten Smith), a contractor working with the American military in Afghanistan, overheard the violent interrogation of an Afghan man suspected of working with the Taliban. He was later found dead; the military quietly swept it under the rug and took the witnesses' words at face value. Now, one of the soldiers involved is running for office, spurning an investigation by a Harper's reporter named Shar (Jo Mei). Thus Laura has to relive the evening, reconnect with one of the other soldiers, Taylor, (Kyle Haden), and explain some murky, questionable thoughts on ethics to her teenage son, Beau (Eric Weigand). Eventually, things lead to the murdered man's daughter, Khadija (Nilanjana Bose), who's settled down in California and works at Whole Foods.

A number of factors cause the promising premise to fall short, the most apparent being the minimalist set design and unorthodox stage direction. The set, which is circular, completely bare, and about 20 feet in diameter, takes up only part of the stage. Outside of it are four chairs for the actors to sit when they’re not part of a scene. It's hard to say what its desired effect was, but it mostly ends up being distracting. That, plus the lack of set dressing, puts this worldly story at odds with its cerebral staging.

We Are Among Us is a respectable endeavor, but simply falls short of its lofty ambitions. The actors — particularly Bose and Wiegand — do their best to liven up some of the drearier dialogue, but in the end, it's not enough. If you're interested in the nuanced complexities of Afghanistan/U.S. relations, maybe just stick with Drobot's intro, then hit the library.