WDVE personality Bill Crawford is finally at the top of his comedy game, but it was a long road | Comedy | Pittsburgh | Pittsburgh City Paper

WDVE personality Bill Crawford is finally at the top of his comedy game, but it was a long road

"My sense of humor is in full bloom in this city." 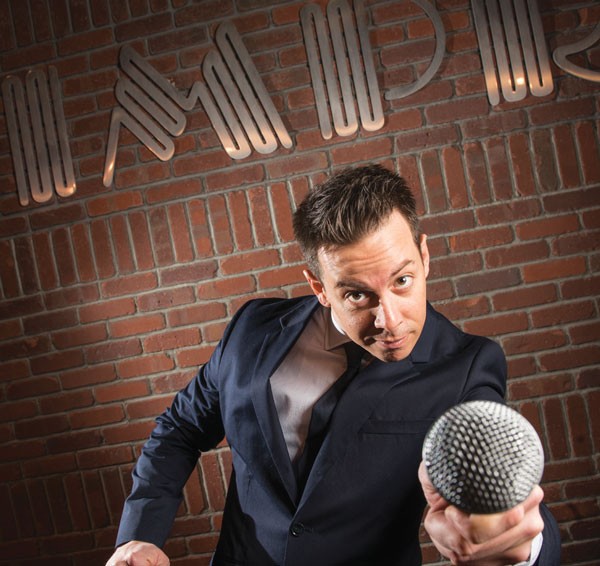 Dawn's barely broken outside the DVE Morning Show studios, and inside, co-host Bill Crawford is apologizing profusely. But he's doing so in the voice of Steelers wide receiver Jerricho Cotchery.

To Crawford, Cotchery's smooth voice sounds like the bass from Boyz II Men who tended to soliloquize apologies during songs. So when the Steelers lose, Crawford impersonates Cotchery apologizing while "End of the Road" plays. This time, though, Cotchery himself has called in, and Crawford's about to play the joke for its target.

Mid-conversation with Cotchery, and nervous, Crawford lets out an "uuuuh" — an awkward, slightly prolonged throat-clear. After they hang up, host Randy Baumann won't let Crawford hear the end of it.

"I was so nervous!" Crawford confesses into his mic as Baumann plays the flub over and over, and everyone in the studio cracks up. Later, Crawford says of the on-air mockery, "I don't mind being the butt of the joke. I never have ... if people are laughing and think it's funny, that's the only standard I have."

But Crawford's L.A. stint didn't last long. At the end of his first week there, his uncle died. Soon after, his mother had a heart attack, and soon after that, his sister was in a horrible car accident. "One by one," Crawford says, "each family member was like, ‘We need you to come back.'"

Crawford didn't find an easy road in Pittsburgh, either. "There was no comedy scene," he says. Other than the Improv and The Funny Bone, there were few places to perform, "so I literally just started making up rooms by myself."

He and some comedian friends began playing "dirt-bag bars and Elks' Clubs and places that never, ever, ever should have a comedy show," he says. One makeshift stage was simply Crawford standing between two dartboards. "They were like, ‘We have a lamp we'll put on you.'"

"They'd plug us into the P.A., then not turn off the Monday Night Football game," he says. At another place, "there was a pool table right in front of the stage, and dudes actually played pool while the show was going on. That's when you know you're not yet doing what you should be doing in the comedy business — when people are racking 'em up and breaking 'em right in front of your set."

Things got easier after 2004, when veteran DVE Morning Show host Jim Krenn, whom Crawford calls a mentor, caught his set at the Pittsburgh Improv and invited him to guest on the show. Crawford used his weekly on-air appearances as a bargaining chip to get more bar bookings. He became a bigger name at the Improv, and eventually toured, opening for acts like Jim Breuer, Bert Kreischer and Steve Byrne. He enjoyed being on the road, but it took him away from his longtime girlfriend and two daughters. "My family is number one," Crawford says.

Crawford's standup often alludes to life as a cash-strapped family man. About watching The Bachelor, he jokes, "It's just unrealistic expectations that show creates. They're taking helicopter rides over thousand-foot waterfalls. My girl's like, ‘I wanna go on a helicopter, baby!' ... I'm like, ‘The only way you're getting in a helicopter with me is if you trip on a squeaky toy, fall down the steps and have to be life-flighted.'"

But early this year, comedy finally turned more lucrative. This past January — weeks after Krenn was abruptly released from the morning show — Crawford was offered a full-time spot on WDVE, an event he calls "the opportunity of a lifetime." For a comedian, he says, being on the DVE Morning Show is "the equivalent to growing up here and playing for the Steelers." For Crawford, there's nowhere else he'd rather be. "This is home base," he says. "My sense of humor is in full bloom in this city."

Still, Crawford remains modest. "I'm playing small ball," he says of his career. "I was just raised that way, I guess — to always be humble. My mantra when I come [to work] is, ‘Be humble, be grateful, keep it light, have fun.' That's how I've always tried to approach comedy."

Back in the studio, Baumann discovers it's Crawford's birthday and announces it on-air. "I get the birthday blues," Crawford laments, sheepishly. But when the mic clicks off, he says to Baumann, "The best birthday gift I got was Jerricho Cotchery loving that bit."