“Watain performances do indeed go beyond the established concept of a rock concert in the sense that they serve as crossroads between this world and the untamed, chaotic chasm of hungry darkness that lies beyond its borders.”

Since forming in Uppsala, Sweden, in 1998, Watain has caused a stir in the music world for its combination of rabid black metal and blood-soaked and flame-filled rituals (a.k.a. concerts). The band has released five albums of aggressive metal influenced by the best of dark and occult music, ranging from Bathory to Fields of the Nephilim and Deep Purple. CP emailed vocalist/bassist Erik Danielsson a few questions about the band’s upcoming tour. 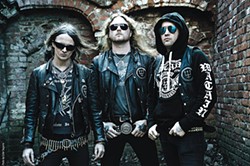 How would you speak to the ceremonial/religious aspects of your music and live performances to a layman who may be invested only in the riffs and rebel imagery?

I don’t know if I necessarily would! Those aspects are not there for the sake of people understanding them, but rather because they are a natural part of who we are and what we do with Watain. … But yes, Watain performances do indeed go beyond the established concept of a rock concert in the sense that they serve as crossroads between this world and the untamed, chaotic chasm of hungry darkness that lies beyond its borders … Riffs and rebel imagery may sound like small concepts, but when they are the outcome of profound ideas and primal unaltered energy, they are as worthy a focal point as anything else in Watain.

There has been a decided lack of blood and fire when I have seen you perform in the U.S., versus what I have seen in videos and photos of performances elsewhere. What limits and regulations do you face when performing live in the U.S., and how does this affect the ritualistic aspects of the performance?

There has not been one show in over 10 years that we have performed in the U.S. without blood smeared on our flesh. Perhaps people expect to be drenched in it or whatever, because they heard about that happening from time to time. … The blood, again, is something we use for our own purposes and sometimes people won’t notice that it is there. But believe me, it always is. And this time you will know it.

Fire, however, is a different matter. Very hard to do in the States. Even in Europe actually, but there we have been able to penetrate the first layer of paranoia to the point where we can actually tour with our full stage set-up most of the time. … We do, however, have some aces up our sleeve for the future that might change things, we will see. …

With all this being said, for us as a band it is not necessarily a negative thing to have to tour without the fiery elements of our performance. This just means we have to put our focus elsewhere, and derive energy from other directions. There must be a reason why I always remember the U.S. shows as slightly more violent, hostile, primal somehow …

The black-metal audience has always had a conservative streak — especially regarding what is acceptable musically — that has often been at odds with the outlaw-rebel mentality of the bands. Have you given any credence to these attitudes as Watain has evolved musically?

Not much, no. Watain has always been concerned with more profound matters than whether or not the music sounds the same all the time. … We defined our essence very early on as a band, and from that essence we grew a strong, unbendable spine of ideas, codes and symbols that to this day remains immutable. The artists that have been blessed with such will also be the ones that dare to venture where their contemporaries fear to tread. While if you are uncertain and insecure about what you are doing and why you are doing it, you will stick to safe formulas and walk in others’ footsteps instead.

How much of a connection, both personally and musically/spiritually, do you have with your legendary tourmates Mayhem and Rotting Christ?

Both bands were of great importance when we were initiated into the [b]lack-[m]etal movement! I’ve seen so much blood flow with these bands’ music playing in the background. … I have not been following much of their later careers, but we obviously harbor respect for the legacy that they were and still are a part of. I am really proud of this tour package, it feels like a very special one in this day and age.

This is Part II of the Black Metal Warfare tour. Will there be a Part III? What do you have planned next? Can you speak a bit about the Music, Blood, and Spirit film that you are involved with?

The reason why there is a Part II of this tour is because the first one only covered about half of the States. So we are trying to cover the rest on this one, plus coming back to a few places that really seemed hungry for more. After this tour, all that is planned is silence, reflection and contemplation, which usually means going into a creative phase. Let’s leave it like that for now…