We are inside looking around rather than outsiders staring in 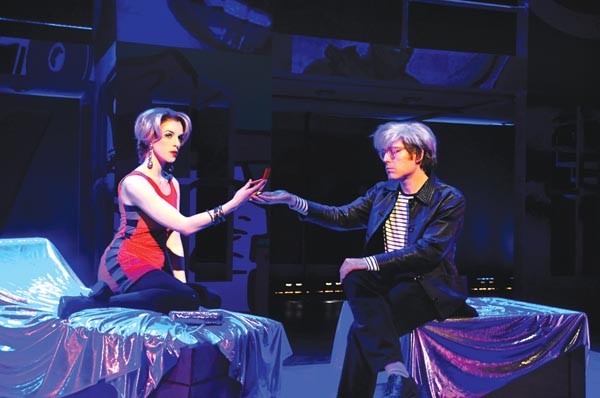 The considerable punch of City Theatre's POP! is a collective power building almost intangibly to land, at the end, like a sock in the jaw.

The beginning, however, is a bit rocky. This 2009 musical examining the 1968 shooting of Andy Warhol features a score by Anna K. Jacobs, with book and lyrics from Maggie-Kate Coleman. We open just at the moment Warhol is shot. Then Jacobs and Coleman lay out the schematic: It's a murder mystery, with the suspects being a group of Warhol regulars: Candy Darling, Ondine, Valerie Solanas, Viva, Gerald Malanga and Edie Sedgwick.

It seems a touristy take on Warhol, The Factory, the '60s, et al., as emphasized by Jacobs' hodgepodge musical style and Coleman's scattershot lyrics.

But without any clear line of demarcation, the landscape changes, the toothless Disney approach is replaced by vision with real bite, and we are inside looking around rather than outsiders staring in.

This transmutation is best exemplified by Anthony Rapp's performance as Warhol. He does a dead-on Andy, which is certainly funny if a bit "stagy." What's remarkable, though, is that Rapp never backs down, allowing the story evolving around him to add shading and meaning. If at the start Rapp's affectless Warhol is charming, by the end we understand the emotional cost such a malevolent passivity had on the people around him

And it's a thrill to tell you about those people: Brian Charles Rooney, Paul Victor, Alyse Alan Louis, Bria Walker, Jess Carrey-Beaver and Courtney Bassett are blasts of extraordinary talent. And if I single out Rooney as Candy Darling and Louis as Valerie Solanas, it's only because they have the showiest roles. Each actor is perfection.

Musical director Doug Levine and his band charge through the 22 numbers with talent burnished to a high gloss, and Billy Porter has created some rather amazing choreography.

It's left to salute the man who's brought it all together, Brad Rouse and his insightful and almost sinfully entertaining direction. Rouse, Jacobs, Coleman and company have staged one hell of a ride.