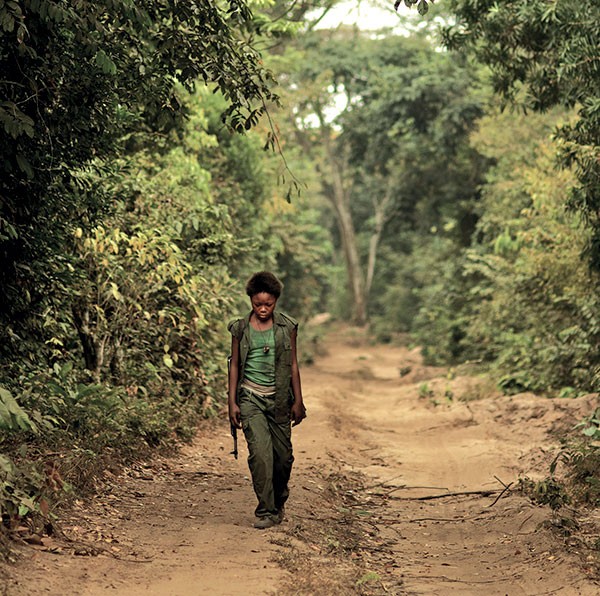 In French and Lingala, with subtitles.

When we first meet Komona, she is 14 and pregnant. She tells her unborn baby, "Each day I pray to God that I don't hate you."

In Kim Nguyen's fictionalized account of an African child soldier, War Witch, Komona shares her story, explaining to her baby — and us — how her short life has already arrived at such a fraught place.

At 12, Komona (Rachel Mwanza) is living in a small, poor village, when she is captured by guerrilla fighters and conscripted into their army of child soldiers. The first act demanded of her is that she kill her parents. Sobbing, she complies, and the initiation is complete: "You are now a rebel of the Great Tiger."

During the brutal jungle training, Komona, now carting an AK-47, has two small pieces of luck: She befriends the boy-slash-shaman known as The Magician (Serge Kanyinda), and she reports seeing ghost soldiers. These ghosts are likely manifestations of a troubled mind, a child's processing of trauma, but the rebels decide she is a "war witch," with useful extrasensory powers. Yet what little protection this status confers is countered by her forced sexual submission to the rebel leader, and the grueling days spent mining rare-earth minerals.

The Oscar-nominated War Witch is a Canadian production, and though the story is set in an unnamed country, the film was shot in the Democratic Republic of Congo, a fair stand-in with its own history of child soldiers, blood minerals and unending guerilla warfare.

Nguyen's film is beautifully shot, combining lyricism and brutality. (The violence depicted here defines unspeakable, but is rarely shown in graphic detail.) For all the horrors, there is also lightness, such as Komona's sweet relationship with Magician, and the rare moments when they can be children. And the importance of mysticism and myth in these lives — from villagers to the Great Tiger leader — is deftly intertwined with the narrative, incorporated in both the dark and the light: A war witch is a fearsome being, but the pursuit of an elusive but lucky white rooster is a cause for delight.

War Witch tackles a difficult subject without exploitation or bombast, relating the events from Komona's bewildered point of view. Nguyen found a winner in Mwanza, who is not a professional actress, yet nonetheless brings depth and sensitivity to Komona's horrifying account.

The damage is irreparable, and the future uncertain; even Komona wonders if she has any humanity left to care for her own child. There are glimmers of hope, but the film heartbreakingly suggests that for young Komona, the best may simply be surviving.