War is hell and so much more in CMOA’s On Contested Terrain, the first-ever survey of work by Vietnamese American photographer An-My Lê | Visual Art | Pittsburgh | Pittsburgh City Paper

War is hell and so much more in CMOA’s On Contested Terrain, the first-ever survey of work by Vietnamese American photographer An-My Lê

Photographer An-My Lê and her family fled their home country of Vietnam in 1975 at the end of the war, and the experience stuck with her throughout her life and career. This is abundantly clear in On Contested Terrain at the Carnegie Museum of Art, the first-ever comprehensive survey of her work.

On view from March 14-July 26, the show will feature 110 photographs that span from the beginning of Lê’s career, when she used large-format, black-and-white photographs to document the return to her homeland in the 1990s, to several series of often-staged images meant to portray what a press release calls “the impact of the military on people, the landscape, and cultural memory.” It will also include new works from her latest series, Silent General, on view for the first time.

CMOA curator of photography Dan Leers says the opportunity to present such a major show demonstrates the museum’s dedication to the art of photography.

“It’s very exciting that we are able to present it here in Pittsburgh and hopefully draw a lot of attention to the city and to this artist, and to the museum, and, honestly, what we’re doing with photography on a whole,” says Leers, pointing out that the museum now has photography-specific galleries, including the recently opened In Sharp Focus, which grants access to more than 70,000 images by Charles “Teenie” Harris, who used his camera to capture Black life in Pittsburgh throughout the first half of the 20th century.

He adds that by playing with traditional approaches to photography, Lê’s work addresses “very complex questions about the legacies of historical conflict on the landscape and on ourselves,” and how it relates to current wars overseas or the immigration crisis at the U.S.-Mexico border. 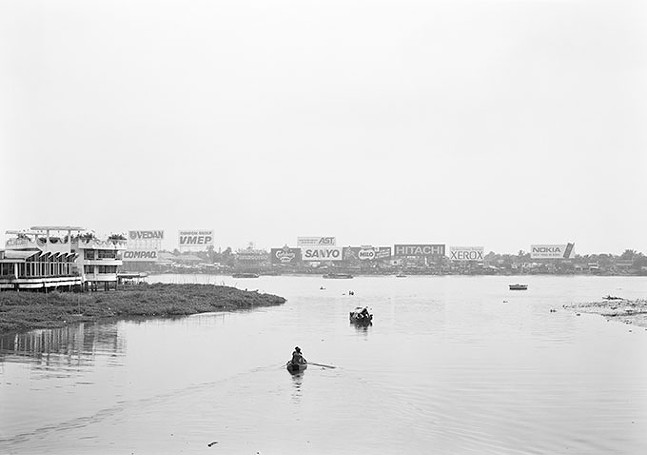 “It does so in a very nuanced and subtle manner that really provides our audiences the space to contemplate the picture, to look closely, and to formulate their own ideas and opinions about what these photographs and what the conflicts and what these landscapes mean to them,” he says.

By staging so much of her work, Leers says Lê also questions the idea of truthfulness in photography. This includes Small Wars, in which she photographed and participated in Vietnam War reenactments in South Carolina, and 29 Palms, a collection showing U.S. Marines rehearsing combat in a California desert before being deployed to Iraq or Afghanistan.

He adds that the museum also reached out to local Vietnamese and veteran communities to organize programming that would provide different, insightful perspectives on the photographs. This includes a talk between Lê and Viet Thanh Nguyen, the Vietnamese American author of the Pulitzer Prize-winning novel, The Sympathizer.

“I think it will be very personal and intimate for our visitors to see the photographs through someone else’s eyes or in light of someone else’s experiences,” says Leers.