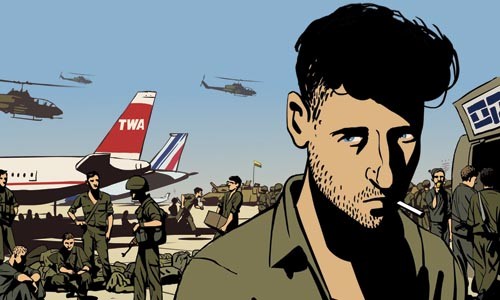 Life during wartime, in Waltz With Bashir

The subject matter of Ari Folman's unusual documentary Waltz With Bashir is no less important for being so often told: If the particular massacre at the center of his film isn't well known to everyone, wartime atrocities are.

But Folman, an Israeli filmmaker, has found a new way to tell this story that suits his polymorphous talent. In Waltz With Bashir, we never quite see the faces of the soldiers -- Folman among them -- who talk about the killings they witnessed in 1982 at Sabra and Shatila, two Palestinian refugee camps in Lebanon. Folman's film is animated with imagery in the style of a graphic novel. He draws everyone the way they really look, and we hear their actual voices. They're all his Israeli army comrades and friends, whom he visits a quarter-century later, plus a few psychiatrists to whom he turns as he tries to reconcile his own inability to remember what happened and what he saw.

This technique distances us from the material, no doubt by design: Folman's subjects speak with quiet contemplation about the issues he wants to explore. The film's title refers to an elegiac memory of a soldier's danse macabre, flanked by posters of Lebanon's revered (and soon assassinated) President Bashir Gemayel, as the soldier sprays bullets into a building where a sniper hides out, picking off Israeli soldiers in their urban bunker.

After 20 minutes or so of Waltz With Bashir, when I stopped being impressed by its handsome animation, I began to find it all to be too contrived, just as I did Maus, the prize-winning graphic novel about the Holocaust. The abstraction of animation doesn't visualize these events more powerfully, or make them any more profound, than looking into the eyes of the men who are telling their stories. What's profound here is what actually happened.

It's certainly true, as one expert says, that memory changes with what we're asked to remember (or told we remember). But are the sullen memories of a few men so important when we have ample footage of the bloodied bodies who aren't alive to remember anything at all? You could even say that Folman diminishes what happened at the refugee camps by making his film more about his own attempt to remember. That's one issue he explores in his film.

Another is the mess of the war-ravaged Middle East. The Palestinians at the camps were killed by Lebanese Christian Phalangists while the Israeli soldiers did nothing to stop it. That's where Folman's personal struggle comes into play. And although his film doesn't discuss politics and religion, the incendiary elements fueling this perpetual fire, he's clearly asking his young country to examine itself, and to question its complicity. Only one Israeli political figure appears in the film (Menachem Begin, on a bank of TV screens in the window of an appliance store). For better or worse, Waltz With Bashir is largely Folman's story, shorn of politics and faith.

Folman's final animated moment offers his most compelling one: a closeup of his younger self, realizing what he and his comrades had allowed to happen. Then, he cuts to actual documentary footage of the carnage and the weeping survivors, evoking the concentration camp (Auschwitz) that incarcerated his parents during World War II. It's effective, of course -- how could it not be? -- but it also shows Folman's loss of artistic nerve.

Waltz With Bashir depicts things we don't usually see in animation: vomit, bloodshed, full frontal nudity (men and women). The film has its Apocalypse Now moments, as the men surf on the beach between lulls in the fighting and groove to Israeli wartime rock 'n' roll songs. ("Sure, we kill some innocent people along the way," one tune croons.) Folman's script is spare -- and yes, some of the dialogue feels scripted -- with its wisdom coming in spurts. "Isn't it better to pray?" one soldier asks another in battle. "Then pray and shoot," his friend replies. That, Folman seems to be saying, sums up the history of his embattled country. In Hebrew, with subtitles.