Pixar scores another hit with its robot love-story, space adventure.

Some time in the future, Earth is deserted. In one of its forlorn formerly great cities, crumbling skyscrapers now sit in the shadow of even taller ziggurats of compacted trash. The sky is dark with pollution, river beds have dried up, and virtually no creature is left alive.

Trundling along in solitude is a small, dinged-up trash compactor, who spends days collecting and compressing debris into neat cubes, and nights mulling over artifacts retrieved from the garbage. This lonely little robot is a Waste Allocation Load Lifter * Earth-Class, or WALL*E, for short.

In his Dumpster lair, WALL*E ponders old kitchen implements and toys, and opens still-delicious, golden-cake desserts for his only companion, a cockroach. Further hours are spent wistfully watching a pair of romantic, musical numbers from a much banged-up VHS copy of Hello, Dolly.

His routine is interrupted by the arrival of a spaceship, which disgorges a high-tech, egg-shaped robot who immediately starts scanning the landscape. WALL*E is entranced, and after some awkward introductions, learns this is EVE, an Extra-terrestrial Vegetation Evaluator, sent to Earth to look for signs of life.

No wonder WALL*E's smitten: EVE has sleek, clean ergonomic lines, and gleams pure white, with huge blue, blinking LED eyes. (It's the same old story: the beautiful rich girl in the white summer dress who slinks into the garage to capture the heart of the filthy greasemonkey ...)

Remarkably, a live plant is found, and EVE rockets away back to her employers. A stricken WALL*E follows, clinging to the spaceship's exterior, desperate not to lose his new friend.

So begins a glorious sequence that takes the little guy out of his day-to-day crud and through our familiar, colorful galactic landscape -- past the moon, the rings of Saturn, the fiery sun -- and deep into space to parts unknown.

WALL*E is the latest animated family feature from director and co-writer Andrew Stanton and the gang at Pixar. It's a cleverly written tale that is equal parts comedy, space adventure, cautionary eco-warning, sci-fi dystopia and love story. And the undisputed star of this thoroughly engaging film is that winsome, little metal guy: WALL*E manages to find love, thwart evil, restore Earth's balance -- and, I have little doubt, win your heart.

It seems with each new Pixar film, writers must scramble to find new superlatives to describe the stunning animation. But the payoff here really isn't the fantastic landscapes, the beautifully rendered light or even the variety of odd creatures we encounter, as marvelous as that all is. No, WALL*E's greatest achievement is that its animators have imbued distinctly inanimate objects with wholly believable sentient and emotional life.

For me, the best animated features use the technology to show us something extra-ordinary, whether it's an aspect of our physical world that is otherwise unimaginable, or some unknowable entity, such as a dirty cube of metal falling in love.

The affection we feel for WALL*E derives from his relatable emotional features that his Pixar creators have rendered simply and organically from his standard robot parts: binocular eyes that pine, metal fingers that reach out tentatively, the startled reversal of his tractor-tread feet, his diligence toward his assigned task.

Of course, having huge, vulnerable "eyes" makes WALL*E instantly cute (and something about the inquisitive tilt of WALL*E's "head" recalls Luxo Jr., the "star" of Pixar's groundbreaking short about articulated lamps). But there are no shortcuts to establishing WALL*E's humanity, such as the faces added to autos in Cars or the chattering fish of Finding Nemo.

While there's no dialogue for the 'bots per se, both WALL*E and EVE make a variety of beeps and burbling sounds which are easy to interpret (fear, curiosity, sadness, joy, etc.). WALL*E is "voiced" by longtime sound designer Ben Burtt, who also put words in the mouth of another likeable robot, R2D2.

If I had one tiny quibble with WALL*E, it was the ending. There was the suggestion that Stanton might go for a conclusion that would have inspirational, wise and satisfying, but with bittersweet grace notes. It would have been technically more logical than the sentimental ending he ultimately delivered ... but who are any of us to stand in the way of a trash compactor realizing his heart's desire? 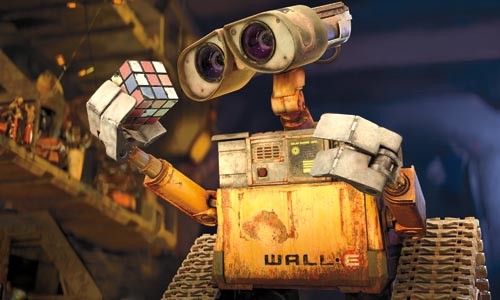 WALL*E, examining one of his treasured artifacts