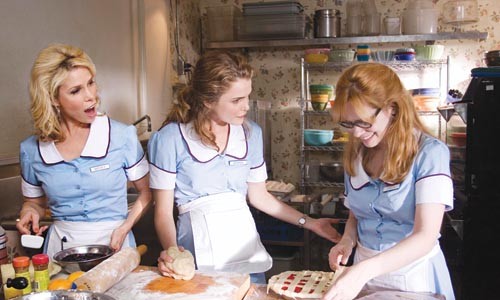 What do women want? Hopefully not movies like Waitress, writer/director Adrienne Shelly's trite little treatise on true love and lowered expectations, wherein the titular heroine and her friends -- men and women, young and old -- hobble along the mellow brick road to happiness, a mythical place known only in their dreams.

It's set in the South -- what's more instantly charming than a Southern accent? -- and revolves around Jenna (Keri Russell), a waitress at Joe's Pie Diner who makes the most delicious pies in the world. She's a genius at it, and every day she creates an original pie for the place. Some have normal names, but some -- if only in her imagination -- go by names that suit her perpetually gloomy mood, like "Baby Screamin' Its Head Off in the Middle of the Night Pie" or "'Cause I'm Havin' an Affair Pie."

Those two particular pies are rife with fruit filling and meaning: She just found out she's pregnant, she doesn't want a baby, she hates her awful husband (Jeremy Sisto), she begins an affair with her sweet doctor (Nathan Fillion), everyone she knows is miserable, and so on, depressively, until a happy ending, wherein Woman triumphs over all of the sociology and psychology going against her -- thanks to a dying old codger (Andy Griffith) who leaves her a lot of money.

Uh, sorry: plot spoiler. But honestly, you'd have to be watching your first movie not to know where Waitress will land (softly). If Shelly meant this to inspire women, then they'd better all have Dutch uncles with liver disease. Her movie is chronically dreary-cum-cute, and its Southern setting, one of many devices to cloy things up, feels instantly phony. (Shelly was born in Queens, was married to a corporate CEO, and was murdered in Manhattan six months ago.)

Russell, of TV's Felicity, is much better than the material, and appealingly sultry. But this Fried Green Tomatoes without the cultural veracity (Fannie Flagg was a Southerner) and without the satisfying air of a yarn. It's Mystic Pizza, too many years later (been there, seen that, over and over). It's Chocolat with a crust. And so on and so on: There's not a single original moment in Waitress, which can support neither its feeble feminism nor its quirky romanticism.

Just how trite is this movie? When Jenna senses that her doctor has a crush on her, she coolly leaves his office, then goes back for her purse -- and they leap into each other's arms. In the diner, a bratty kid acts up, and the soundtrack plays Wagner. Shelly seems to want to explore, ever so gently, the tragedy of some women's lives. But the deeper tragedy -- apart from Shelly's murder -- is that either this is the best an independent woman filmmaker can do, or else it's the best anyone will allow her to do.