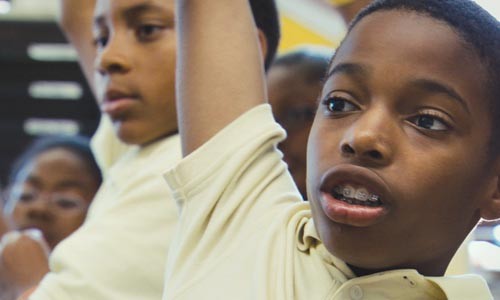 Filmmaker Davis Guggenheim, who brought us An Inconvenient Truth, now turns his lens on another hand-wringing topic: the state of public education in the United States. The film is a huge info dump, with lots of statistics, charts (albeit wittily illustrated) and talking-head interviews with many concerned parties. Guggenheim doesn't tell us anything that any reasonably informed person doesn't already know (or chose to ignore): Our public-education system is an unwieldy mess that fails a lot of our kids, especially if those kids live in low-income urban areas.

To personalize this monstrously huge crisis, Guggenheim follows five students -- four young minority kids from the inner city and a teen-age white girl from an affluent California suburb -- as they seek admission to high-performing charter schools. A couple of these kids will break your heart when their earnest, naked desire to learn hits a brutal reality: The few open spots at these schools are awarded by public lottery. Guggenheim structures his film so that viewers will feel they have seen the very moment this kid was lost to insurmountable failure, wasted potential riding on a plastic lottery ball.

The film offers a bullet-list of possible solutions -- from charter schools, more private investment and dropping teacher tenure -- but it's a lot of skimming on the surface. The charter schools presented here seem wonderful, but a blip of a statistic also presented admits that four out of five charter schools are underperforming. The need for "good teachers" is lauded, but neither that term nor how we'd measure it is ever explained. And Guggenheim focuses on elementary school -- where kids do first get off track -- without talking about high school, where the situation is catastrophic. Other unmentioned topics: parents, taxes, race, politics, sports ... sigh. This is simply too complex an issue to be covered in one movie, however engaging. It's sure to spur debate, and if that examination somehow adds to progress rather than continuing rancor, Waiting will have been a good thing.