Waiting for Godot at PICT Classic

The big surprise is that it's often funny yet reverential, both to Beckett's text and the movement style of Laurel and Hardy. 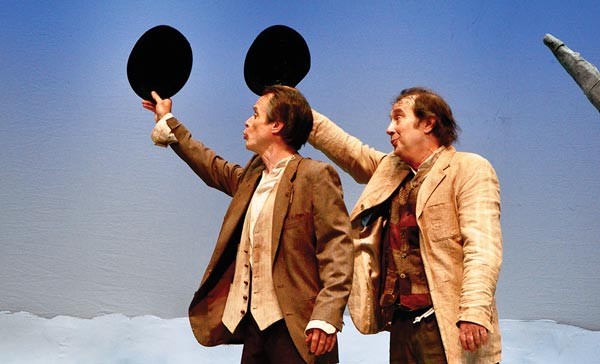 Apparently I've been mispronouncing the title since my ancient undergraduate days, when Samuel Beckett's 1949* classic first crossed my consciousness as one week of a Modern Theater class. The professor and my fellow students likewise put the accent on the second syllable, as Americans do. Brits tell us that this is the opposite of what the Irish-born Beckett intended: a rhyme that establishes as credible the possibility that the larger-than-life Pozzo can be mistaken for the never-seen Godot.

That's surprise No. 1 in the Waiting for Godot produced by PICT Classic Theatre (né Pittsburgh Irish & Classical Theatre). The bigger surprise is that it's often funny yet reverential, both to Beckett's text and to the movement style of the early-20th century duo Laurel and Hardy (widely supposed as inspirations for Godot's Estragon and Vladimir, respectively). One might call the performers' carefully nuanced gestures smooth, studied, even stately. Modern audiences are likely to find them exasperatingly slow.

OK, so Godot is not for the casual or drowsy theatergoer. Many library shelves, lectures, symposia, curricula, etc. have been filled with arguments, analyses, explanations and expectations, and more than a few lamentations, about this Most Serious of Absurdist Plays. I wouldn't try to upstage them.

PICT's Godot, directed by Aoife Spillane-Hinks, is one for the books — or the bookish, like scholars and students. But while it might seem slow, it's never stodgy or clumsy. The gentlemen enunciate their body language as well as their vowels. Bracketing the questions, the action and the stage are Martin Giles as the timid Gogo and James FitzGerald as the more perspicacious Didi. Alan Stanford, the company's artistic and executive director, looms large (literally) as Pozzo — a role with which he has long been associated — and as the production's scenic/co-costume designer. Ken Bolden approaches Joycean heights in his sole speech as the mostly mute lackey, Lucky.