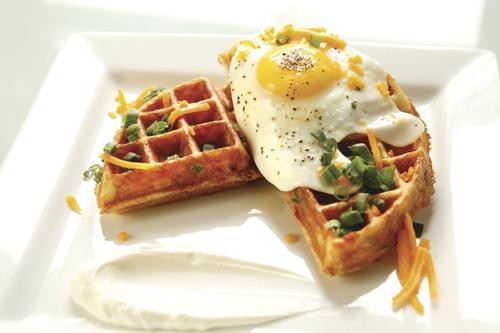 Brunch is not a meal for which we like to undertake a long journey. Ideally, brunch involves nothing more taxing or time-consuming than an easy stroll on a Sunday morning. The whole concept of brunch dissuades putting a lot of effort into it. But we're going to have to make an exception to our short-distance brunch rule, because we recently discovered that the best waffles around are a lot farther away than the corner shops -- and worth every mile.

Located on the charming main drag of New Brighton, Waffles, INCaffeinated has been the dream of Tahj Merriman since he was 15. A young chef with a serious resume and a serious commitment to waffles, Tahj knows that good things take time. Like opening his dream waffle shop with friends and partners, Josh and Cassandra Cuddy.

Or, like the five-year-old sourdough starter that lends its distinctive tang to the waffles' rich flavor, making them a marvelous foil for both sweet and savory toppings. The waffles themselves are between traditional American-style and ultra-thick Belgian: They're bigger than your mom's waffle iron, but with similar proportions. The happy result is an almost fluffy interior surrounded by a delicate, almost crackly crispness.

This waffle batter, made fresh daily, is the basis for breakfast dishes as indulgent as sundaes. Sweet options include the Funky Monkey (chocolate chips inside the waffles, and bananas, peanut butter and chocolate sauce on top) and the Oreooooo (Oreo cookie crumbles inside, cheesecake spread, chocolate sauce and more Oreo crumbles on top). Got more of an eggs-and bacon kind of appetite? For you, there are waffles with sausage gravy; or the Breakfast Magic, with bacon, cheddar and green onions inside, topped with a fried egg, sour cream and something called "Precious Ranch Dust." You can also customize your waffles with a dizzying array of mix-ins, from apples to sesame seeds, and toppings ranging from the classic -- whipped cream, cinnamon and sugar -- to the unexpected: smoked salmon, espresso dust or salsa.

The various topping syrups are homemade. Angelique had the Megaberry waffle -- both filled and topped with fresh strawberries, blueberries and raspberries -- customized with a special syrup, lemon ginger. Normally this dish comes with the berries tossed in vanilla syrup, the long, slender vanilla-bean pods still reposing in the decanter and infusing it with the spice's authentic spicy-sweet bouquet. This would be delicious enough, but Angelique loved the brightness and subtle zing of the lemon-ginger syrup, flavored by lemon puree and freshly grated ginger.

Jason's a sucker for sausage gravy, but truth be told, he usually prefers his own. Not this time. Chef Tahj's was the best he's ever had. And, in proof that the best cooking is often the simplest, there were only five ingredients. Two of them were nontraditional: bay leaves, which added a unique flavor dimension, almost perfuming the fine sausage, and onion, minced to provide both vibrancy and a little bit of crunch. These simple twists transformed the sausage gravy, which can be a thick, heavy, one-note biscuit topping, into something truly special. The sourdough tang of the waffle on which it was served evoked the buttermilk of traditional biscuits, while the ratio of crisp crust to fluffy interior actually made the waffle a better gravy base than most biscuits, with their doughy interiors.

Now, we know that some people will say that waffles just aren't their thing. Waffles, INC knows it, too, and offers enough breakfast sides to create a traditional plate such as bacon-and-eggs. You can also get French toast, albeit pressed in a waffle iron; the result is a slice of egg-battered Texas toast that's both chewier than a waffle and crispier at the edges than traditional French toast. Additionally, the selection of lunch sandwiches is modest but exquisite, including pulled pork, salmon, seasoned lamb and a deceptively common choice: chicken salad on a croissant. The menu describes the chicken as spicy, but "spiced" would probably be more apt; the blend of mayo and moist, cubed chicken is fully flavored, but not hot on the palate. Spinach was a nice choice for a complementary green filling, and the croissant itself was flaky and rich.

Finally, this local business, owned and operated by Beaver County natives, should be commended for green business practices, such as using recycled and reclaimed products whenever possible; and, historic preservation, with its reuse of a house built in 1850. A trip to Waffles, INC not only tastes good; it feels good, too.