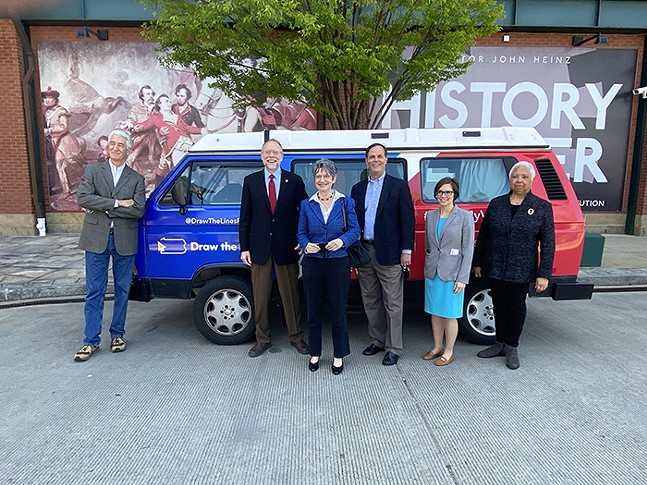 Today, Pittsburgh was the 35th stop in The Great Pennsylvania Voteswagon Tour of 2021, a project led by Draw the Lines PA, the civic education initiative created by the Committee of Seventy. Since the beginning of April, Committee of Seventy CEO David Thornburgh has visited various Pennsylvania towns and landmarks to, as a press release puts it, “highlight the redistricting process and the damaging impact gerrymandering has on fair elections.”

The tour is in response to the results of the 2020 U.S. Census, which were released today April 26 and will determine the 2021 redistricting process. This will be of increased importance this year, as Pennsylvania will lose a congressional seat — down from 18 to 17 — and drawing new maps to ensure fair representation will likely become a political battle.

“Redrawing legislative lines happens once every ten years. How it is done has a tremendous impact on everyday Pennsylvanians and the communities they live in,” says Thornburgh. “From determining who represents you in Harrisburg and Washington, D.C., to distributing funding, to ensuring that elected officials actually represent the needs of the communities in which they live — how and who draws our lines matter.”

The Voteswagon stopped outside the Heinz History Center to take advantage of the museum’s American Democracy: A Great Leap of Faith exhibition. There Thornburgh was joined by History Center president and CEO Andy Masich and Dr. Dana Brown, executive director of the Pennsylvania Center for Women & Politics at Chatham University.

After the event, Thornburgh and the Voteswagon conducted a mini tour of the Strip District and planned a stop at Freedom Corner to meet with community members in the Hill District.

Masich, who also serves as a member of the Draw the Lines Western Pennsylvania Steering Committee, says Voteswagon is part of the museum’s America 101 civics initiative, which “encourages citizens to act on the promise of our nation’s founders and help write the next chapter of our democracy.”

“I am proud to add my voice to those calling for equitable and transparent redistricting practices as Pennsylvania's Legislative Redistricting Commission begins that work,” adds Masich.

Brown, who is a co-chair for Draw the Lines PA, says the tour bears some significance to women gaining the right to vote 101 years ago, as it emphasizes the importance of voting equity and calling on everyone to not just vote, but take active roles in the political process.

"The Pennsylvania Center for Women and Politics at Chatham University has been committed to empowering women to run for office, emphasizing the critical nature of our voices to the well-being of this country and to our democracy,” says Brown. “I am honored to be part of the Draw the Lines initiative, and grateful that the Voteswagon has stopped in Pittsburgh to shine a light on what redistricting means to us here."

Gerrymandering in Pennsylvania has come under scrutiny in recent years, and for good reason. In 2017, a report from the Brennan Center, a voting law nonprofit, cited the battleground state as one of the most gerrymandered in the country. The report also outlined how the state is victim to “extreme levels of partisan bias” – since 2011, Republicans often redistrict areas in order to keep or gain more Congressional seats.

Those Congressional seats were tossed out by the Pennsylvania Supreme Court in 2018, citing a unconstitutional partisan gerrymander. The seats for the U.S. House were redrawn to be more fair, but the Pennsylvanian state House and state House seats, which were not part of the lawsuit challenging the congressional seats, remained, despite claims of gerrymandering for the state level districts as well.

Besides Draw the Lines PA, other groups like FairDistricts PA have sought to address gerrymandering by demanding reform that would prevent political parties from controlling the redistricting process. They also hold meetings and events like the Voteswagon tour to make the public aware of the issue. (Pittsburgh City Paper media partner Pennsylvania Capital-Star recently released a helpful primer on gerrymandering and how it works.)

Some progress has been made, like the 2018 Pennsylvania Supreme Court decision. Even so, state Republicans have continually challenged and criticized that decision. This included going all the way to the U.S. Supreme Court, which rejected a bid by Republican legislators to reinstate the 2011 map.