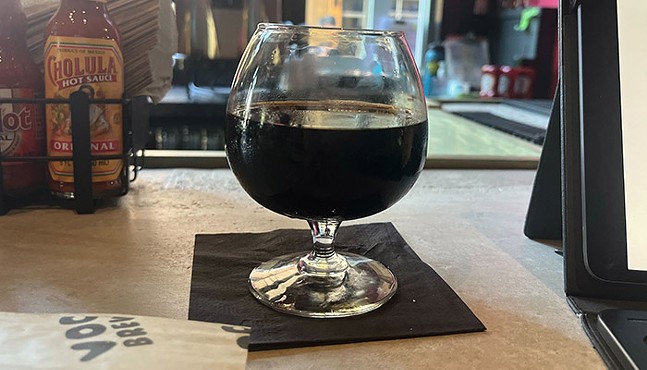 CP Photo: Owen Gabbey
Voodoo Brewery's 2 Live Gran Cru Greatest Hits - Volume 6, a blend of stouts and barleywines that have been aged 24-48 months
Ask people who aren’t from Pittsburgh what jumps to mind about the local beer scene, and chances are pretty high that Voodoo Brewery will be one of the first names mentioned. The longtime staple has seen such success that they have expanded their horizons from the original taproom in Meadville to places all across the state. Now, they turn their sights to the North Side.


With their grand opening this past weekend, Voodoo’s newest taproom has taken up residence right on North Shore Drive, a hop, skip, and a jump away from both PNC Park and Acrisure Stadium. The new location is a welcome addition for centrally located Pittsburghers who previously had to go to Homestead for their closest Voodoo fix. As the company says in reference to their flagship beer, they’re bringing “the good vibes to the North Shore.”

CP Photo: Owen Gabbey
Voodoo Brewery's macademia and almond ice cream sandwich
When I checked out the space, I experienced a mixture of everything that has made Voodoo the great brand it is, as well as their new ventures branching out and finding new avenues. Their Homestead location is a quirky spot nestled right into the heart of the community, but their newest brewery definitely offers some advantages. For one, there is a massive, dog-friendly outdoor patio area that wraps around the back of the building so that guests can directly overlook the water.

The other big change can be seen in the menu. While Voodoo is a brewery first, they’ve also long been known for having a better-than-average food menu at all their locations. The new spot immediately expands and enhances anything they’ve done on this side of the operation. Culinary Director Sean Kirzyc says Voodo expects about 55% of revenue to come from the food at their North Side location, which is a drastic shift from their other taprooms. 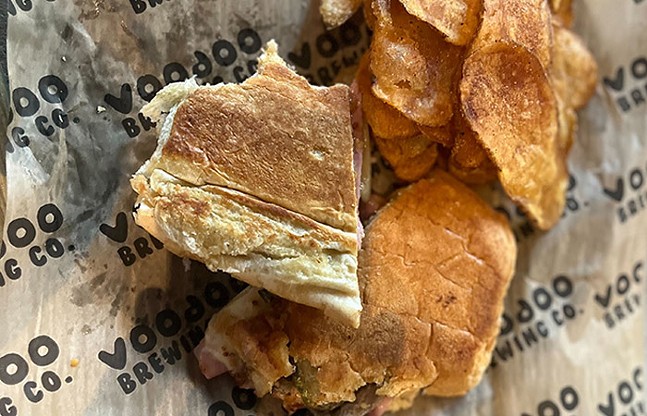 After getting my dessert out of the way, I moved on to my main course, Voodoo’s spin on a Cuban sandwich with smoked duck swapped in for pulled pork. It was both delicious and inventive, and their entire menu is decorated with items like this, featuring everything from a Tortilla Burger to a Pork Belly Banh Mi Sandwich to a Chimichurri with truffle fries.

Oh, and the beer isn’t half bad, either. While Voodoo is known for their classic Good Vibes West Coast IPA or their Belgian Tripel Belgian Love Child, I think their lighter, classic-style beers are where the brewing really shines. I tried Oh Mama, their traditional American lager named after the Styx song "Renegade" (regularly played during Steelers games), and Poznan Pivo, a traditional Polish lager. Both were perfect beers for a boiling-hot Saturday.

You’ll also sometimes find something special on tap, as I got a chance to have one of their vaunted Barrel Room Collection stouts on draft, a feature the brewery says will be an occasional occurrence. A secret menu of sorts.

Expect an additional focus on the brewery taking advantage of the unique things the North Side has to offer, like watch parties for Steelers and Pirates games, and events like block parties that connect with the community. But even if you go on a random Wednesday, you’re going to get a new jewel tucked along the Allegheny: a spellbinding mix of great food, unique beer, and, of course, those good vibes.