Despite some missteps, the relocated and revamped Vivo is worth a visit 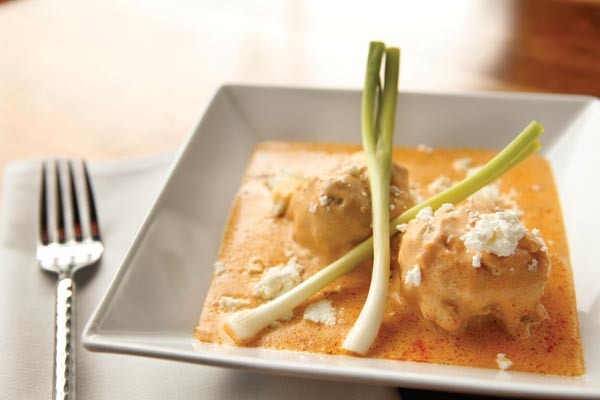 Back when Vivo was in Bellevue, it was the crown jewel of that little Ohio River town's restaurant scene, offering fresh and innovative Italian-inspired food in surroundings reminiscent of a room from a Tuscan villa. A few years ago, owners Sam and Lori DiBattista relocated downriver to Sewickley, though by keeping the short, sweet name, with its pleasing suggestions of vigor and vino, they maintain a connection with their successful beginnings.

The DiBattistas took the opportunity of the move to rethink and refresh their restaurant (as well as to add a liquor license, prohibited in Bellevue). The update is immediately apparent in the restaurant's aesthetic. Where the old Vivo was announced by a fanciful iron-and-glass awning attached to an old storefront, the new Vivo is entered through gates that open onto a private courtyard beside the dining room, which is sleek and modern where its predecessor was funky and eclectic. Lori DiBattista's warm hospitality still greets customers at the door, but instead of reciting the daily menu to each table, she now serves as hostess and delivers printed menus of much greater length — and breadth — than could be spoken from memory.

This points to the most fundamental change, which is in the food itself. No longer can Vivo be described, even loosely, as an "Italian" restaurant. Chef Sam DiBattista's new offerings are contemporary American with a vaguely European accent, featuring elegantly simple preparations of elemental, straightforward ingredients: roasted mushrooms with gorgonzola, scallops with blood-orange sauce. Flavorings such as lemon, garlic and fennel reflect DiBattista's Mediterranean heritage with some specificity, but the entrees, especially, focus on grilled and roasted meats, intriguingly flavored.

Having said that, two of our starters were classically Italian: locally made rigatoni in "simple red sauce" and a pork-chevre meatball in spicy pepper cream. The former was so simple, with no frills to hide behind, that it had to be delicious — and it was, with bright, smooth tomatoes clinging to firm, dimensional pasta. The latter was quite distinct from a typical meatball in that it was made of a coarse grind of pork, loosely formed, for an almost sausage-like texture. Chevre crumbled on top added an almost pungent tang that complemented the hearty flavor of the pork, while the thick, rich, subtly spicy pepper-cream sauce was good (and plentiful) enough to eat with a spoon.

Everyone at our table clamored for a taste of an appetizer that riffed on a classic American breakfast: a fried egg with bacon jam on grilled bread. This did, indeed, contain all the flavors and textures that make that breakfast so satisfying (if not revelatory), condensing them from a hungry man's platter into a single small plate.

The appetizers had done their job; our appetites were piqued as we waited for our entrees. And waited, and waited. When they finally arrived, the varying temperatures of a cold pork chop, a lukewarm piece of fish and piping hot lamb shank suggested a lack of coordination in the kitchen. Our server, who had largely abandoned us during our wait, offered little or no apology, let alone explanation, for the delay.

Fortunately, superb preparations mostly compensated for these issues. Rich, fork-tender lamb paired perfectly with an earthy-sweet celeriac mash. Prime rib was robust and juicy, seared on the outside, which effectively contained and countered the tenderness within. A classic garlic-herb pan sauce was perfect to heighten the meat's natural flavor. And if root vegetables could be described as ripe, the tender-sweet potatoes served alongside would have been at their peak. But broccolini was so salty that we left it on the plate, uneaten.

Grilled bronzino was available whole or filleted, simply dressed with lemon, olive oil and sea salt, and served on a bed of Israeli-style couscous, whose larger grains had a satisfyingly substantial texture and a light, late-summer flavor. The citrus gremolata served with the veal chop was a touch too assertive for the mild meat, and the chop itself was a bit fatty, but these were quibbles about an otherwise very good dish.

Vivo's chic new appearance provides a suitable ambience for its new menu, which relies — wisely, we think — on ingredients and preparations that are classic without being reiterative. Only the warmth — of food and service — that we remember so fondly from the old Vivo has yet to fully relocate.