This 2010 "rock musical comedy" is fun and forgettable, but in a good way 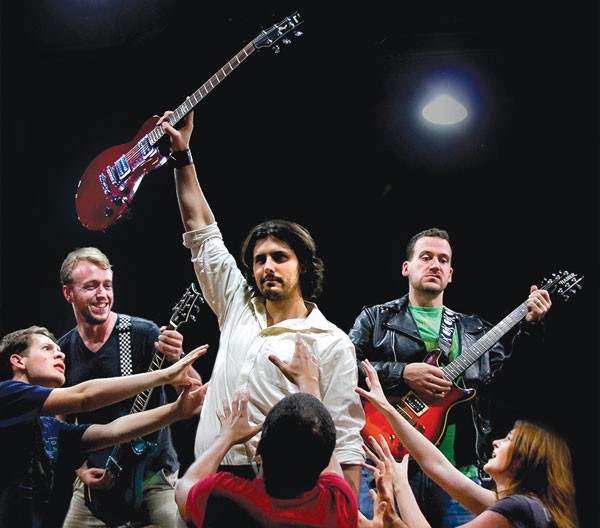 No Name Players at Off The Wall Theater
Carnegie.
$15 in advance, $20 at the door.

Recipe for success: Get about a dozen people on a small stage pumping out basic rock songs and nonstop nonsense, and if (a huge IF) they can pull it off quickly and effectively, you get a decent show. And so you have the No Name Players and artistic director Don DiGiulio's multi-cast ensemble delivering on so many levels in the local premiere of Jake Oliver's Viva Los Bastarditos!

Think of this 2010 "rock musical comedy" as cotton candy: fun and forgettable, but in a good way. It's fluffy and sweet, though often sticky.

First of all: The show makes no sense, with a roadie-less (but successful) rock band fighting for freedom in western Massachusetts against medieval-like villains and President Taft. Oliver, a former Bostonian, has thrown a lot of in-jokes about the 1930s land grab for the Quabbin Reservoir and other WestMass tidbits, including owls, chowder and local cheese. And of course, while whaling away at evil and wailing through the score, The Pickles (yes, that's the band's name) find true love and a higher purpose.

The most remarkable performance comes from the chameleonic Andrew Swackhamer, heedlessly chewing the scenery and working it off frenetically, as his Dancin' Eddie Danson bad-guy morphs from Alice Cooper-wannabe to a Zorro-type villain. Thank you, choreographer Kaitlin Dann. Other notable scenery-munchers include the multi-cast players who switch from good guy to bad at the literal drop of a hat: Jody O'Donnell, Corwin Stoddard, Missy Moreno and Jason A. Shavers, who also belts out heavy vocal duties.

The leads and lovers — David Bielewicz and Hayley Nielsen, and Brad Stephenson and Daina Michelle Griffith — are brave and loyal in the face of highly improbable hazards. The leftover Pickle, played by Luke Bruehlman with a puppet, provides less necessary comic relief. And applause is due to: musical director Joseph P. Stamerra (who also leads the pit band); Eve Bandi, lighting; Julie Andrzejewski, costumes; and Ryan McMasters, sound.

A ridiculous mishmash, Viva Los Bastarditos! is often chokingly funny, but definitely not for the whole family.