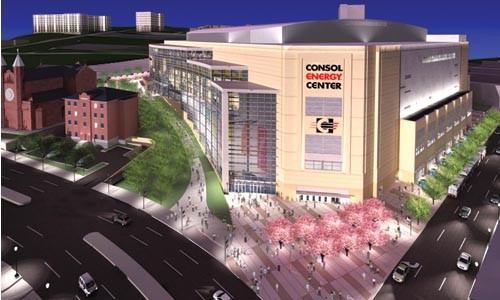 This is what designers say the new Consol Arena will look like. Hill District residents, though, want to make sure they have input on how the surrounding neighborhood should look.

As the New Year approaches, the Hill District is finally starting to develop a plan for the neighborhood's future, in concert with the Pittsburgh Penguins. But community leaders might be wise to work quickly: Come mid-February, their vision could become blurred.

After the Penguins got a green light to build a new hockey arena, the team joined government officials and neighborhood groups to craft a Community Benefits Agreement (CBA). Among other things, the agreement guaranteed Hill residents input on plans to develop 28 acres surrounding the Penguins' new facility, Consol Energy Center. And community leaders are already laying a foundation for development.

At a Dec. 11 meeting of the Hill Planning Forum, community representatives introduced a list of 19 preliminary development principles -- including the desire for more greenspace and mixed-income housing -- to help guide future deliberations.

There is consensus on at least one of those principles already: Both the community groups and the Penguins support demolishing Mellon Arena.

"The planning committee wants to see no part of the arena at the end of this planning process," says Carl Redwood, who heads the Planning Forum. Noting that the arena's construction displaced some 8,000 residents and businesses in the early 1960s, Redwood says the structure "symbolizes the destruction of the Lower Hill."

Local architect Rob Pfaffman recently made headlines by proposing that Mellon Arena be preserved, and turned into a multipurpose facility. But the community wants to restore the original street grid, allowing Webster and Wylie Avenues to be re-extended into Downtown. The Penguins seem to agree.

"We want to reconnect the Hill with Downtown," Penguins President David Morehouse says.

But some of the neighborhood's proposals may be less palatable to the team: On its wish list, for example, is a requirement that minority-owned businesses receive at least 30 percent of the development contracts. And the Hill District may be poised to lose some of its leverage early next year.

Under the terms of the CBA, a Master Plan Steering Committee -- composed of four community members as well as representatives of local officials -- must approve a plan by Feb. 19. If that deadline is missed, the Penguins have the right to develop the 28-acre site on their own. And a series of delays make it highly unlikely that a master plan will be complete by that date.

At a press conference in April, Mayor Luke Ravenstahl and city councilor Tonya Payne, who is ending a four-year term representing the district, announced that the city would begin seeking consultants to aid in the planning process. But that announcement came months too late, said Redwood. It wasn't until Nov. 20 -- just three months before the Feb. 19 deadline -- that the Urban Redevelopment Authority hired Philadelphia-based CHPlanning Ltd. That vote had been held up a month so that Payne, a URA board member, could review the firm's qualifications.

Redwood says the community will begin working with CHPlanning in early January. That leaves just a little more than a month before the Penguins can bypass the planning process ... and Redwood says that merely approving the plan will take the Hill District Planning Forum longer than that.

Still, the Penguins say they are determined to work with the community, and Redwood says he's not likely to seek an extension.

"We don't want to fight that fight," says Redwood. "We're not focused on the deadline."

"If we're unable to finish by the deadline, we should ask the Pens for an extension," says state Rep. Jake Wheatley, who represents the Hill. Wheatley has been critical of the CBA process, but says an extension "has to be done in conjunction with the Pens, not forced upon them."

"I don't believe [the community] needs to fight that fight," agrees Payne, who will be competing for Wheatley's legislative seat next year. "If there needs to be an extension, an extension will be granted. ... Everyone wants the community to be a part of the process."

"The deadline is inconsequential for us," Morehouse assures.

Morehouse says the Penguins haven't even developed their own ideas for the 28 acres, though they've previously hired firms to determine how the land would best be developed.

"They're just vision documents," he says. "There's no final plan."