CP Photo: Jared Wickerham
A tofu bacon, egg, and cheese sandwich from Viridis in the South Side
The landscape of vegan restaurants in Pittsburgh is pretty solid. With a few heavy hitters across the city, if you’re vegan, or just curious about the diet, you have a pretty good list to choose from. Viridis, a cafe on the South Side, opened in 2020, and has been serving up vegan comfort food ever since.

Like many other businesses in the neighborhood, Viridis sits right on the bustling East Carson Street. The facade is clean and simple, a white paint job with a Viridis sign in blaring white neon. If you look too quickly you might miss it, but it's a place worthy of your attention.

After having followed and admired Viridis on Instagram, I decided it was time to give them a try.

I went to the restaurant for breakfast with a friend. The place is usually open Thursday through Sunday, and they sell out quickly so we decided to arrive early.

I ordered the breakfast burrito, and my friend got the “sausage, egg, and cheese” on a biscuit. We both rounded out our meals with chocolate chip cookies and Americanos. 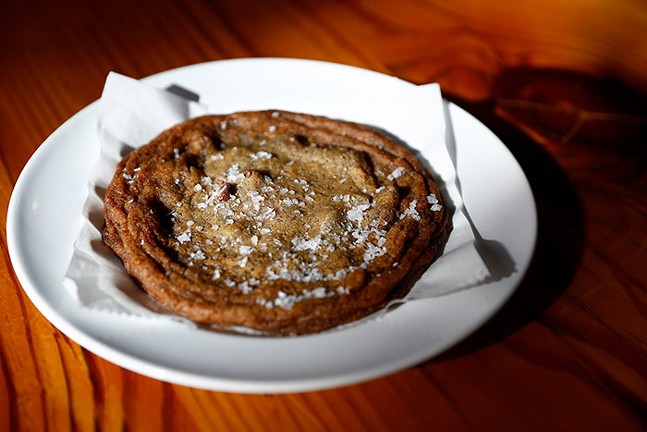 CP Photo: Jared Wickerham
A chocolate chip cookie from Viridis in the South Side
We first got the cookies which the cafe graciously warmed for us. These were the best looking chocolate chip cookies I had seen in a while, and they, like everything on the menu, were completely vegan, so I had to try them. The cookies are huge and marbled, flat but dense like the baker uses a lot of oil or a butter substitute to bake them. The edges were perfectly browned and crispy, the whole thing topped with flakey salt.

The stars of the day were the breakfast burrito and biscuit. An Instagram post on the Viridis account describes the biscuit sandwich as coming with a “house tofu egg patty” and slice of vegan cheddar, as well as the restaurant’s “secret recipe” textured vegetable protein sausage. I was pretty straight forward, no sauce or anything added, but we did get a side of Cholula hot sauce.

The burrito usually comes with hashbrowns but they were out of stock so this time it came with sweet potato fries. The rest of the ingredients are a plant-based sausage, tofu egg, tofu bacon, avocado, tomato, cheddar cheese, and a spicy aioli.

The first bite of the burrito was laden with a smoky flavor from the tofu bacon, cut with sweetness from the sweet potatoes. The potatoes are heavily seasoned and crunchy, so I assumed they are fried or baked with lots of oil. The spinach, tomato, and avocado add a much needed freshness and creaminess to the mix. The tofu egg supplies a new texture and does taste like egg. Many vegan chefs use black salt and seasoning like nutritional yeast to achieve that effect. 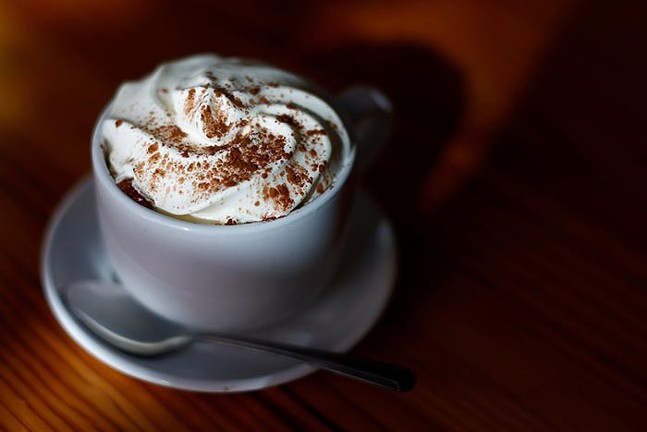 CP Photo: Jared Wickerham
A hot chocolate from Viridis in the South Side
I’m usually not a huge fan of vegan cheeses, but this one was heavy on the savory flavor and creamy, fattiness uncharacteristic of most vegan cheeses I’ve tried. The sausage was a highlight, studded with fennel seed. Its flavor is very similar to the breakfast sausage I remember from my meat eating days.

My friend said that the biscuit was dense, but flaky and tasty, which can be hard to achieve with vegan biscuits. With a little of the hot sauce, the density was cut and the added spice also improved the experience.

Overall, the food at Viridis is worth coming back for, especially on a cold, snowy day. Viridis. 1506 E. Carson St., South Side. viridispgh.square.site 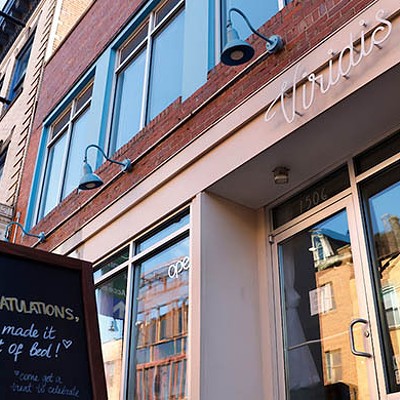