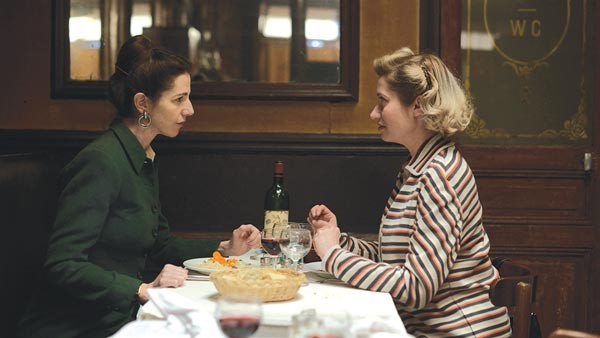 Martin Provost's lush bio-doc recounts the tumultuous life of French author Violette Leduc, who published The Bastard in 1964, and is heralded as a critical and early feminist writer. But before that, Violette was a tough-skinned woman, born out of wedlock, who toggled between emotional bouts of self-destruction and a fierce desire to survive. (The film begins during World War II, during which Violette grew to be a skilled black-marketeer.) But then she meets Simone de Beauvoir, and the two develop a long, if at times prickly, friendship.

De Beauvoir (Sandrine Kiberlain) believes Violette's messy life can be saved through writing, and she encourages Violette's on-page candor drawn from her life (abortion, affairs with both sexes, a troubled relationship with her mother). For her part, Violette (Emmanuelle Devos) is in love with de Beauvoir, and alternates between seeking and rejecting her approval. It's melodramatic, but in that high-class French literary way, and Devos is a revelation to watch as the insecure but fiercely determined Violette.