“Do we really want to turn all of our kids into criminals? That’s not what schools are for.” 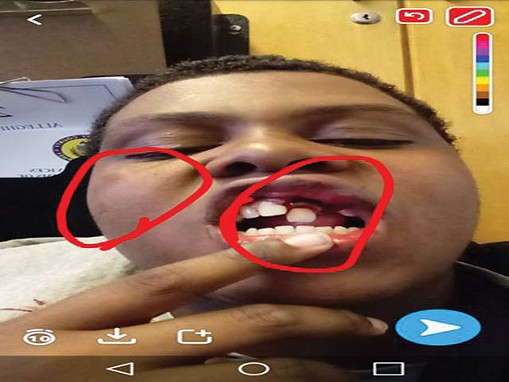 In a video from March 3, 2015, then-15-year-old Ahmad Williams can be seen sitting in the main office of Woodland Hills High School, a blue binder in his lap. He had been sent there by a teacher after being disruptive in class.

Seconds later, Churchill Police Officer Steve Shaulis lifts him from the chair, wraps an arm around his neck and pushes him down a hallway before forcing him to the ground. With his head held down by Woodland Hills High School Principal Kevin Murray, Williams is tased at least two times by Shaulis and handcuffed.

Following this incident, Shaulis continued to work in the school, but this wasn’t the last time he would get physical with a student. Last month, he allegedly knocked out one of 14-year-old Que’chawn Wade’s front teeth.

Wade had been accused of stealing a cell phone and was sent to the main office, where he can be seen in video footage talking to Shaulis before leaving the room. After an exchange of words between Wade and Shaulis in the hallway, the officer grabs Wade and pushes him back into the room and then into an office off-screen where Shaulis allegedly hit Wade in the face.

Since the second incident, Shaulis has been removed from the school, but the recently released footage of the two incidents has sparked national outrage. Parents and activists are calling for further action in Woodland Hills, demanding justice for students at the high school. They’re also calling for the firing of Shaulis and Principal Murray.

“I cannot find one reason for officer Shaulis to become physical in any of the incidents we’ve seen,” said Brandi Fisher, president of the Alliance for Police Accountability at a press conference where video footage of both incidents was released. “What message is this sending to kids — when they’re in an environment where they’re not only being verbally abused, but physically abused — that they will not receive any help. We are calling on our district attorney to evaluate these cases. The system is protecting predators and criminalizing children. The entire community should be standing up behind these children in that school district [who] are being abused and violently attacked.”

This isn’t the first time Woodland Hills has gained attention for its disciplinary procedures. Last year, the district was ranked in the top 10 of schools nationwide with the highest rates of out-of-school suspensions at the elementary level. And juvenile-justice experts say these incidents highlight the issues surrounding school resource officers (SROs) — police officers like Shaulis who have been contracted by districts to work in schools — and how they contribute to the school-to-prison pipeline that funnels African-American students into the justice system.

“I’m sorry these young people and their families are going through this situation, but I’m glad these videos are coming to light,” says Harold Jordan, a senior policy advocate at the Philadelphia office of the American Civil Liberties Union. “I’ve been very critical of districts for bringing police into matters where they should not be. Ordinary school discipline should not be a police matter. I’m not saying all school police officers or school resource officers behave in that way, but what we’re seeing in those videos is horrifying.”

“Woodland Hills is like a lot of other schools in the country in that schools with black children and/or children who are poor are more likely to have officers placed in their schools full time,” Jordan says. “That’s what studies show.”

And because SROs tend to be placed in schools with high populations of low-income and black students, Jordan says people often aren’t quick to reprimand officers who get physical with students.

“I think sometimes members of the general public are kind of naïve when they hear about these things, and they think, ‘Oh, it must be kids fighting, and the cops are in there breaking things up,’” Jordan says. “There’s this notion that these bad kids need to be policed. And you also have a situation where the accountability mechanisms are thin if any. It’s a volatile combination.”

But Jordan says it’s clear from the video footage that officer Shaulis acted inappropriately, and he says the call from many in the local community to have the officer fired is justified.

“Whatever was said between the kid and the officer, it is totally inappropriate and totally in the realm of excessive force for the officer to grab the kid and throw him on the ground and drag him down the hall. And for the principal to appear to condone that behavior is in many ways reprehensible,” Jordan says. “This was not a kid who pulled a gun or a knife on an officer, and then the officer tackled him to the ground.”

“There is a school-governance problem,” Jordan says. “Woodland Hills as a school district has extraordinarily high rates of suspension, among the highest in the state. There have been programs that have been brought in and things of that sort. But this is a situation where educators have to be in control. They have a responsibility.”

Woodland Hills Superintendent Alan Johnson says the district has been working to address these issues since it was identified for having high rates of out-of-school suspensions.

“We plan to continue our work focusing all of our efforts on the needs of our students and their full development as individuals,” Johnson wrote in an email to City Paper. “We have done many things in that regard, including rewriting our Code of Conduct, implementing restorative-justice practices and many other things. We’ve been recognized nationally for these efforts and will continue them. These were isolated incidents that do not reflect the values of the school or the Board of School Directors.”

But the two incidents shown in the recently released videos aren’t the only times adults at the school have been accused of misbehavior. Last year, Murray was suspended for several months after he was audio-recorded threatening to punch a student.

“There was an internal investigation held after the audio recording last year, and disciplinary actions were taken in regard to the principal,” Johnson wrote.

While it’s unclear what disciplinary action was taken, last month the Woodland Hills school board hired Murray to serve as coach of the school’s football team, in addition to his duties as principal.

There have been consequences for the students involved in the incidents. Williams, from the 2015 incident, was charged with disorderly conduct and resisting arrest. The resisting-arrest charge was dismissed, and Williams was put on probation for the disorderly-conduct charge. Wade, the student who was allegedly punched, now faces charges of aggravated assault and resisting arrest.

Melissa Sickmund, director of the National Center for Juvenile Justice, based in Pittsburgh, says incidents like these raise questions about law-enforcement officers being tasked to handle discipline issues in schools. According to the ACLU, as schools increase the use of police officers, the number of crimes reported to law enforcement also increases.

“If you watch kids, particularly in the middle-school age range up to high school, kids will push and shove each other in ways adults don’t. That technically is aggravated assault, but really shouldn’t be,” Sickmund says. “One wonders when you look at what actually happened, could this have been handled differently. … A lot of times, it’s just disrupting the classroom. At what point should the resource officer be the one involved?”

Sickmund says the practice of bringing officers into schools was largely prompted by crime in the 1990s. And according to the ACLU, a number of districts in Pennsylvania also increased police presence after the 2013 Sandy Hook school shooting in Connecticut. But according to a 2014 report by NCJJ, there is no evidence to suggest that police involvement in schools reduces crime.

“I think a lot of this is from the fears that existed in the mid-’90s, when juvenile violence was at its peak, and especially on the heels of Columbine, where you had schools all over the country with tremendous fear of deadly incidents,” Sickmund says. “But most of what goes on in schools [are] not deadly incidents. The active-shooter situations we hear a lot about on the news are rare events and typically [don’t] involve students. It involves adults coming in from outside the school.”

Now African-American kids are bearing the brunt of increased police presence in schools. While data isn’t available for most school districts, a review of the Erie School District by the ACLU found that that nearly all of the disorderly-conduct charges issued against juveniles during the 2011-2012 school year were against black students.

“There’s research that says white culture tends to think black youth are older than they are. If you think a kid is 16, they should behave like a 16-year-old, but if they’re really 13 or 14, your discipline might be off,” Sickmund says. “But kids in the justice system should be kids that scare us, not kids who irritate us. Do we really want to turn all of our kids into criminals? That’s not what schools are for.”

Pa. arrests more than 20K for marijuana possession during 2020; just a slight decrease during pandemic