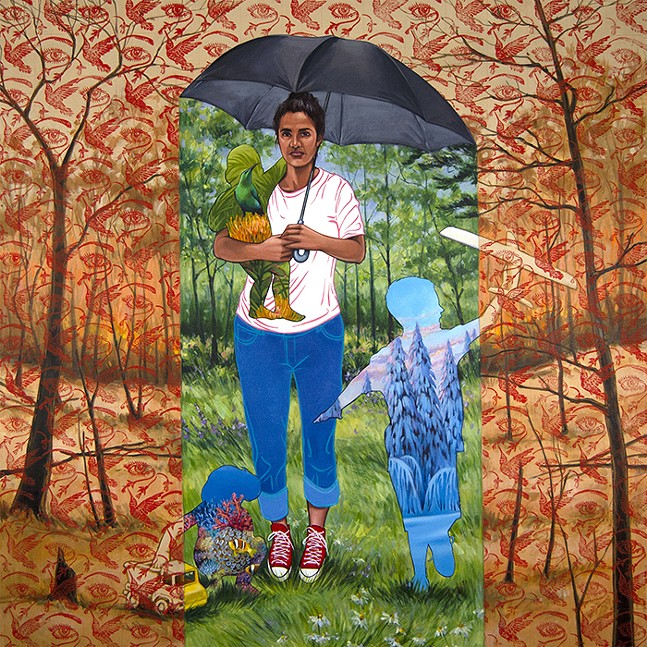 Ashley Cecil’s “Take Shelter”
Anyone who accepts the reality of climate change understands that it will dramatically alter the lives of future generations. For many young or prospective parents, family planning comes with great anxiety about the future, and what it will mean to bring kids into an environment that is increasingly unstable. This is, at least in part, the focus of painter Ashley Cecil's exhibit Violence in Eden, opening at ZYNKA Gallery on Sat., Jan. 9. The show will open with a limited artist's reception available by reservation.

Cecil has previously worked with nature institutions to create art, including an artist residency at the Carnegie Museum of Natural History. She learned about the straightforward science of trees, animals, and other aspects of nature, but this latest exhibit is a project inspired by the more emotional responses to the environment, in part due to becoming a mother during her research.

"To have a family is a very personal, natural thing to do, obviously, and I think a lot of people are feeling sort of robbed of the option," says Cecil. "And if you do it, what sort of weight comes with that in the coming decades? There is a lot of anger and fear wrapped up in this show, too."

Cecil describes an "awakening" she had about the similarities between the oppression of women and the way humans dominate nature. Much of the inspiration for the paintings in the exhibit stem from reading Clarissa Pinkola Estés' book Women Who Run With Wolves. Cecil says she had a paint-splattered copy next to her easel. The book incorporates stories of folklore that focus on nature, womanhood, and the cycle of life.

"I would say that these sources of inspiration are no less lacking in science about nature as the dry papers from science publications," says Cecil. "It's just a different way of articulating it."

The paintings in Violence in Eden vary — some are more abstract interpretations of nature and others are literal depictions of naked women holding fruit. Several pieces in a series called "Invasive Fertility" feature anatomical drawings of pelvic bones filled with fruit, which are being scavenged by critters, like a bat munching on figs. In the more literal "Broken Waters," a mother holds her young child on her shoulders — his head above water — as she floats under it with her kid's teddy bear and a group of dead fish. It epitomizes the metaphorical and literal fears so many mothers have about keeping their children safe.

Ashley Cecil’s “Broken Waters”
Cecil says that while working on the pieces in her home, where she relocated her studio during the pandemic, her kids would ask questions about what they saw in the paintings, and she didn't always know how to answer.

"My 7-year-old often times will come down here and he'll ask, like, 'Well, why is she screaming? Why are those fish dead?' It's been really hard to explain that, probably because I'm as confused as other people," says Cecil. "Sometimes I'm not sure whether I'm feeling elation about the experience of being in this world and so grateful for it, or [I] wanna cry ’cause I'm so sad it's being destroyed the way it is."

Women so often experience emotional and physical violence towards their bodies, and in her work, Cecil connects that with the violence humans have wrought on nature. It's nearly gotten lost among all the other news of the year, but 2020 was one of the warmest years on record, which has been the case for the last several years. There have been record-setting fires in California and within the Arctic Circle. The 2020 Atlantic hurricane season was the most active on record. Cecil says she at first tried to find a synonym for "violence" for the title of the exhibit, but came to the conclusion that it was better to call it like it is.

"There were a lot of other synonyms I considered," says Cecil. “Don't dance around it, it is a violence against women and nature, and the whole environment that cradles life."