It’s a highly clever production with a pitch-perfect cast 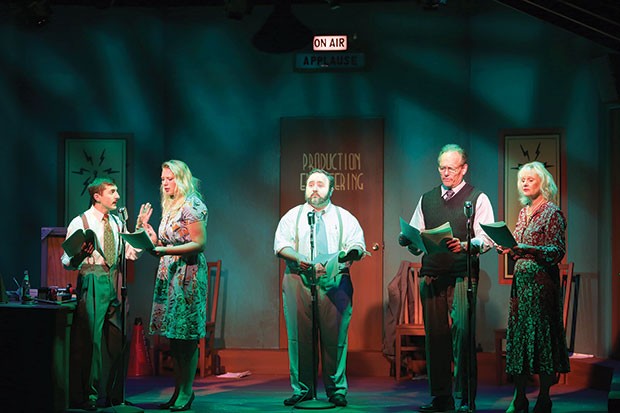 Murder, mayhem, and nostalgia — those are the ingredients for South Park Theatre’s Vintage Hitchcock: A Live Radio Play, a darkly humorous ode to the Master of Suspense’s early years in British cinema.

As the title indicates, this Pittsburgh premiere of a 2009 play written by Joe Landry is performed as a radio show and features renditions of a trio of Hitchcock films: The Lodger, Sabotage and The 39 Steps. While these three tales might not be widespread favorites from Hitchcock’s oeuvre, that only gives this lively production more of an opportunity to make the stories its own. Plus, with a couple of devilish twists that up the proverbial drama, there are enough surprises to keep both the devoted cinephile and the Hitchcock neophyte entertained for the two-hour-plus running time.

Under the direction of Vince Ventura, the seven-person cast is spot-on. Bradley Campbell shifts easily from a Peter Lorre-inspired antagonist in The Lodger to the starry-eyed younger brother in Sabotage, and finally to the fish-out-of-water hero in The 39 Steps, selling each of the vastly different characters with equal confidence. Likewise, Sarah Parker and Caitlin Skaff seamlessly alternate between leading-lady roles and scenery-chewing cameos. Howard Elson pulls off perhaps the hardest part, playing the beleaguered Announcer, who must rush in and out of the recording booth to fill the roster of bit roles in each drama.

As is typical with this variety of “live radio” production, most of the sound effects are created on stage, much to the delight of the audience. In particular, Helga Terre is an absolute crowd-pleaser with her silly yet precise animal impressions. Between stories, the cast performs vintage-style commercials, which riff on Hitchcock’s most celebrated films. Before it’s over, almost every one of Hitch’s most beloved movies receives at least a quick wink-and-nudge mention from the Announcer, which creates a fun inside joke for ardent fans.

With humor and intrigue to spare, Vintage Hitchcock is a highly clever production with a pitch-perfect cast, making it an ideal show for autumn and a macabrely sweet love letter to classic cinema.