Historicity wasn't Vijay Iyer's first album as a bandleader, but it was something of a breakthrough for the pianist. It wound up at or near the top of most jazz critics' year-end best-of lists in 2009, was nominated for a Grammy and continues to generate a deserved buzz.

Hyperbole aside, the album made great strides in redefining the current state of the piano-trio format, with the self-taught Iyer's astounding technique running rampant through everything from West Side Story's "Somewhere" (avoiding saccharinity in the process) to MIA's "Galang" (sounding dirty and funky). Along with the interpretations, there's Iyer's original work, which can make listeners forget about trying to categorize the music and instead get lost in his swirl of melodies that offer as much emotion as technique.

The 39-year-old Iyer was recently named to NPR's list of 100 notable composers under 40, and the kudos for the album have kept him busy.

"I've certainly had more gigs in the last year and a half than the last five years combined," he says. "Which is really what anyone wants out of something like that. I feel really privileged to have the opportunity to get to do that."

But all his time hasn't been taken up by the trio (which includes bassist Stephan Crump and drummer Marcus Gilmore) that he brings to Pittsburgh this week. He also continues to play in a duo with alto saxophonist Rudresh Mahanthappa, and in the trio Fieldwork. Last year, Iyer released a solo piano album, and this month saw the release of Tirtha, an album recorded with guitarist Prasanna and tabla player Nitin Mitta. The latter group came together when Iyer was asked to stage a concert marking the 60th anniversary of India's independence. (Iyer is Indian-American.)

"We didn't really know that it would have a life past that event," he says of the trio. "It felt really good. Even when we started rehearsing, there was more of a natural sound. We didn't need to ask any questions." The music borrows from jazz as well as traditional Indian music, with a bit of progressive rock thrown in via Prasanna; the results sound new and fresh.

As for his current trio, their rapport has solidified to the point where they can go onstage and follow each other's leads without the need for a predetermined set list. "I don't like the sound of routines," Iyer says. "So when I start hearing it in myself or in the ensemble, I try to break it up. We like the possibility of variation and expansion from what we already have." 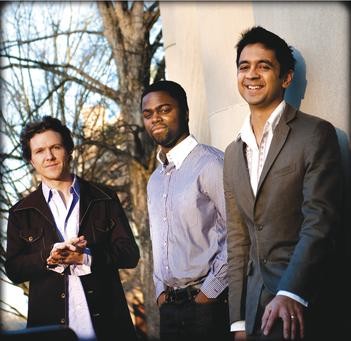