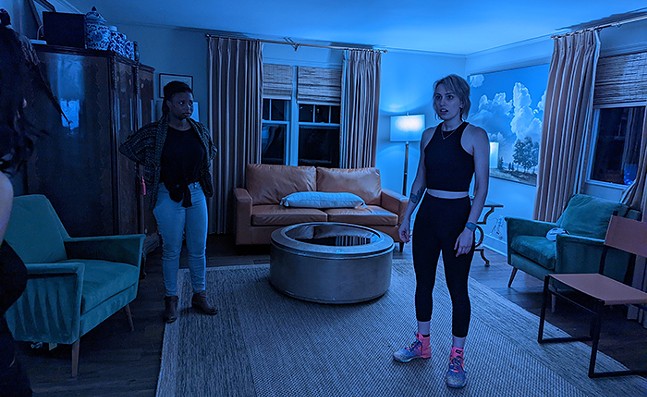 Photo: Courtesy of Vigilance Theater
Blood Moon
Blood Moon, the latest production from the Vigilance Theater Group, bears some resemblance to their previous shows. For one, the venue is not disclosed until guests buy their tickets. It also invites audiences to an immersive theater experience defined by a decidedly spooky or unsettling tone.

The similarities end there, however, as the show, now staging through Sun., June 5, makes for a bit of a departure for the company. As Blood Moon writer Sean Collier explains, the show is more scripted and structured than Vigilance’s previous efforts. The first, Hollow Moon, took participants through a haunted house (an Airbnb in Lawrenceville), and the second, Welcome to Moonside, was set in a freaky otherworld (the former Lava Lounge club on the South Side).

For their newest production, Collier and the rest of the Vigilance team, which includes Blood Moon director Renee Rabenold, instead drew inspiration from classic and obscure slasher films from the 1970s up through the 1990s.

“I've loved the slasher subgenre specifically since I was 13 or 14 and wore out a VHS of Scream when I was a kid, and just really loved kind of the traditional setup, the group of young people getting together and things go badly,” says Collier, who serves as an editor and film critic for Pittsburgh Magazine. “So we wanted to see if we could write one that kind of slots really nicely into that genre."

Besides Scream, he says the production was also influenced by John Carpenter’s iconic 1978 film Halloween, Black Christmas, and a “tacky but fun werewolf movie” called The Beast Must Die.

Collier describes Blood Moon as “more of a sit-down-and-watch show” compared to Vigilance's previous works, but adds that it's “still immersive in the setting and in the environment and in the interaction that is there.”

“This is similar, but it's a bit more of a traditional play in structure,” says Collier. “We have some interactive stretches, there are some periods in the show where the audience will basically have the chance to question the characters directly on what's going on. And ultimately, the audience will be tasked with deciding who they think the killer is.”

Photo: Courtesy of Vigilance Theater
Blood Moon
The production heralds the return of Vigilance after the pandemic kept the young company from being able to connect with audiences over the last two years. It also shows that immersive theater has started returning to the city, despite some casualties. Quantum Theatre, a company known for its site-specific productions incorporating immersive elements, has already come back and even announced more productions for its 2022-2023 season. Meanwhile, one of Pittsburgh’s most respected and active immersive theater organizations, Bricolage Production Company, essentially disappeared over the course of the pandemic and has yet to announce any new projects. Its last big show, the tech industry-inspired Project Amelia, was staged in 2019.

Collier attributes Vigilance’s re-emergence to being small enough to withstand the effects of COVID-19. Over the pandemic, the group also created the virtual show Dawn's Trail: A Cosmic Uncertainty and a radio show that Collier says will be released as a podcast at some point.

“I do think the pandemic was particularly hard for companies that are a little bigger than us but not huge if that makes sense,” says Collier. “Where they have staff to pay and they had kind of a structure and commitments that were just completely impossible for two years. Since we have no permanent staff, it was no difficulty for us to say like, ‘Hey, we're not doing anything really for a couple years.’ But yeah, it'll be interesting to see who bounces back in and how and in what form.”

Collier says the pandemic even gave them the chance to reevaluate Blood Moon, which has been in the works since 2019, as well as what it now means to be “immersive.” Collier cites how the term has been used more loosely to define art exhibits around Vincent van Gogh and Frida Kahlo, as well as themed pop-up bars, whereas before it mostly referred to theatrical productions that included the audience in some way.

“Anything that isn't sitting down at the Benedum and watching a play and then going home, that has a little bit of extra environmental buy-in, you know, anything that really tries to put people in an experience counts,” says Collier. “So I guess we can do anything.”

He also references creators that have taken the immersive concept into new directions, including Meow Wolf, a company that creates massive experiences that transport audiences into “fantastic realms.” Collier recalls how one Meow Wolf production, Omega Mart, transformed a Las Vegas-based warehouse into a massive “bizarro grocery store” owned by a super corporation specializing in making genetically engineered products.

To that end, Blood Moon has been more freeing for Vigilance, which originally tried to create an overall story arc with its productions.

“And when we were first talking about Blood Moon, it was going to be more of the same, you know, it was going to bring back all of these characters and just continue the story,” says Collier. “And then when we got away from it, partially, it was a response to just think thinking, ‘OK, that was three years ago, I don't know if anybody remembers the last show.’ But also stepping back and saying, ‘You know, this is probably going to be more successful if it is more disconnected, and more inviting to audiences who might not have heard of us before, certainly might not have seen our previous shows.’ So we really kind of threw out the original concept to do something that was a little bit more identifiable within the genre.”

Collier says the show was even written with certain cast members in mind, and that it gave opportunities to new performers, some of whom have recently graduated from Point Park University.

As for the future, Collier says that while they may never reach the heights of something like Omega Mart, Vigilance looks forward to further experimenting and surprising audiences.

“This is a little philosophical, but I hope that people get the idea that they shouldn't know exactly what we're going to do next, that they shouldn't assume, ‘Oh, we're going to see those characters again,' or that it's going to be structured like the last one or that it's going to be interactive in the same way that the last one was,” says Collier. “I hope that some people who kind of went through the experience in Hollow Moon and then Welcome to Moon Side was a little bit different, but kind of set up the same way, now go, ‘Oh, OK, they might really turn around the way this experience feels with each progressive production. So hoping that the people who have been with us before are surprised and are and are happy with it.”
Vigilance Theater Group presents Blood Moon. Continues through Sun., June 5. Location disclosed with ticket purchase. 18 and over. Proof of vaccination and face masks required. $60. vigilancetheater.com