We love hole-in-the-wall, barebones ethnic restaurants. Typically run by new(ish) immigrants, these places offer authentic foreign cuisines at prices thousands of dollars below what we would (if we could) spend on airline tickets to the country in question. And when a cuisine moves beyond modest status to large, even stylish, spaces, we are happy for its success -- even as we hope the proprietors can keep it real.

Pittsburgh's newest (and largest) Vietnamese restaurant might mark this moment for Vietnamese food in our city. Some 10 years after the opening of Pittsburgh's first hole-in-the-wall dedicated to Vietnamese cuisine in Lawrenceville, Vietnam's Pho hopes to build on the taste that its predecessors have cultivated for rice vermicelli and long-simmering soups.

Located in a space vacated by an Italian restaurant, Pho features soaring ceilings, gleaming tabletops that needn't hide under cloths, and a handsome oak bar (which, for now anyway, serves only soft drinks). The menu features a manageable selection of noodle and rice dishes, the eponymous pho soups, and a tempting assortment of simple vegetable dishes and appetizers that go beyond a selection of spring rolls.

Indeed, we had a hard time deciding which starters not to order, when we noticed that certain items recurred in the entrees. Thus, Angelique sampled the grilled shrimp and fried spring roll atop her bun (vermicelli), and the only appetizer we missed out on was fried wings.

The first starter we tried, a whole quail with lemon leaves and herbs, was far from takeout fare. The beautiful, mahogany-colored bird was served quartered and bone-in, making it a bit tricky to negotiate with knife and fork. But the crisp, richly flavored exterior was worth any amount of trouble, and the meat within remained succulent, a nice trick with such a tiny bird. When our server told us she eats this every day, we nodded in complete understanding.

The fresh spring roll was stuffed, bolster-like, with noodles; we wished for more fresh herbs, to us the hallmark of spring rolls. The roll wasn't chilled, suggesting that it was made to order rather than sitting in a refrigerator all day -- but ironically this sign of freshness made it less appealing to Jason, who enjoys the contrast of a cool roll with other hot-and-savory dishes.

Nem nuong was described as grilled pork meatballs. But the meat, which had plainly been brushed with a savory-sweet sauce during grilling, had the pinkish hue and salty savor of ham, and the shape was more disc than ball. Regardless, our only regret was that the accompanying tomatoes, which should have offered a bright, fresh contrast, were as wan and mealy as winter-time fruit.

Chao tom, ground shrimp formed into patties and wrapped around sugar-cane skewers, had a thin but flavorful crust on the outside, yet were extraordinarily moist and succulent inside. It wasn't clear how much flavor the sugar cane imparted to the already sweet shrimp, but chewing on it to release still more juices after the meat was gone was a pleasant, novel way to pass the time waiting for our entrees.

A pork chop was basted with a more subtle sauce than the meatballs had been, enhancing the meat without hiding its mild flavor. Water spinach, long and stemmy, was lightly cooked with garlic that had been slowly sautéed, mellowing its characteristic pungency.

Angelique's bun dac biet -- cool rice vermicelli with crispy spring roll, charbroiled pork and grilled shrimp -- was a crescendo of flavors and textures. The spring roll was savory and substantial, its fried wrapper neither greasy nor brittle. The thinly sliced pork was tender with a sweet, barbecue-like glaze, and the shrimp were grilled in their shells, so that they seemed to be presented in individual glassine envelopes. Like all bun dishes, this one was rounded out by the crunchy texture of bean sprouts and peanuts, and the fresh flavors of matchsticked cucumber, lettuce, herbs and garlic, with a light, vinegary sauce to be poured over all.

Last came the pho, which is famously based on a long-simmered beef broth that varies from kitchen to kitchen and day to day, based on which bones are left over from yesterday's cooking. A taste of the broth revealed little more than a mild beefy flavor. But pho is never consumed straight up; it's a medium for meats, noodles and a variety of fresh add-ins. Jason dropped in sliced jalapeños, leaves from a big sprig of Thai basil and a fistful of bean sprouts, and then squeezed in the juice of the better part of a lime. The broth began to come alive, and soon mixed bites of tender noodles, rare, paper-thin slices of beef and fresh vegetables revealed the reason for this dish's iconic status as Vietnam's national food.

If there's room for another Vietnamese restaurant in this town -- and we sure hope there is -- Vietnam's Pho has room for you. 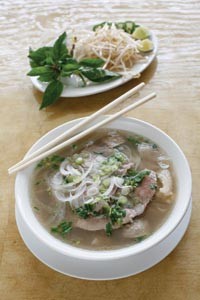