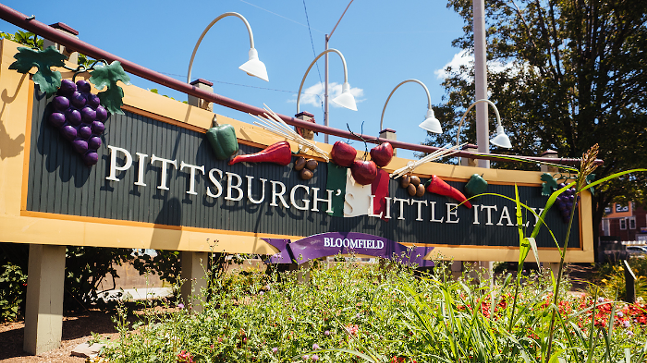 CP Photo: Jared Murphy
Bloomfield's welcome sign
Little Italy Days has returned after a 2020 absence caused by the COVID pandemic, and Bloomfield’s street festival is picking up right where it left off.

The festival has grown massively over the years, and 2021 continues that trend with booths stretching several blocks on Liberty Avenue. Little Italy Days has become so big that some Bloomfield residents have criticized the festival for being too disruptive and not focused enough on the neighborhood's community, local businesses, and Italian heritage.

When watching videos of early days of Little Italy Days compared to the most recent festival, it becomes more clear just how much the festival has changed. Little Italy Days started in 2002 as a small community festival and a parade. It took up just a few block of Liberty Avenue, and mostly had local Italian businesses setting up shop in parking spots on the street, selling Italian food.
A video produced by WQED in 2004 and narrated by Rick Sebak provides a good summary of what Little Italy Days was like back then. This included a parade with floats sponsored by local Italian businesses (with some incorrect statements from a festival attendee about Christoper Columbus); booths selling pasta, pizza, Italian funnel cake, and Italian sausages; and lots of Italian-American locals talking about how they or their parents immigrated to Bloomfield.

Compare that to a video produced by Pittsburgh resident Tad Wissel in 2019, and the differences couldn’t be more clear, with the most noticeable distinction being the size of the festivals. In 2004, there appeared to be about a dozen, maybe two dozen booths. In 2019, there were hundreds. Little Italy Days was taken over by a private entertainment business run by a Bloomfield native in 2012.
The festival is also much more crowded in 2019 compared to 2004, with sidewalks overflowing with people. Wissel highlights the booths selling knives, bedazzled slippers, windows, tropical slushies, Cricket Wireless cell phone plans, Farmers Insurance, and a barbecue booth that had an employee allegedly yell a racist comment toward another vendor.