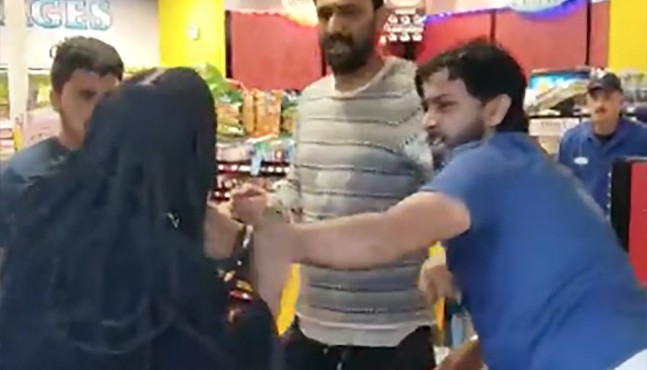 Witnesses can be heard shouting, “That is a girl.”


A longer video on Facebook, showing one of the women getting slammed into a pole, cannot be embedded but can be viewed here.

According to the Pittsburgh Department of Public Safety, officers have filed assault charges against the gas station owners. Police have reviewed multiple videos of the incident and called it “disturbing” in a statement.

The verbal altercation started over an argument about spilled gas. The women demanded a refund after claiming the pump malfunctioned.

As the video spread on social media, many, including political and community leaders, starting calling out the incident and demanding justice for the women who were allegedly assaulted.

Before charges were announced, State Rep. Summer Lee (D-Swissvale) called on the men in the video to be arrested and charged.

If you watched that video and contrived any reason why those grown men could be justified in tag teaming women, dragging them by their hair and punching them in their face I can draw no other conclusion than you don't respect black women and our humanity. #blkinpgh


Lee also pointed out how this incident of violence against two Black women occurred in the same week that a Pittsburgh report showed that the Pittsburgh region is one of the least healthy places for Black women to inhabit in the entire country, and that economic and social inequities against Black Pittsburghers are some of the starkest of any part of the U.S.

On Saturday, protests were held at the gas station, where about 50 were calling for a boycott of the Marshall-Shadeland station.

Exxon gas station closed at Brighton and Marshall, being blocked by protesters. pic.twitter.com/EXmZR1ej8C


Kelli Shakur of Beltzhoover told Pittsburgh Post-Gazette that people shouldn’t shop at this station because of the violence shown in the video against Black women.

“Black people have to take a stand,” she said to the P-G.

Wasi Mohamed, the former director of the Pittsburgh Islamic Center, wrote in a Facebook post on Saturday that the “yet another reprehensible example of the consistent failure of society and individuals to recognize the basic humanity of black women, femmes and non-binary folks. My outrage is with the victims who were assaulted, and more broadly with all the black women in Pittsburgh and beyond who were forced to watch this disgusting, yet tragically familiar episode— facing that trauma yet again.”