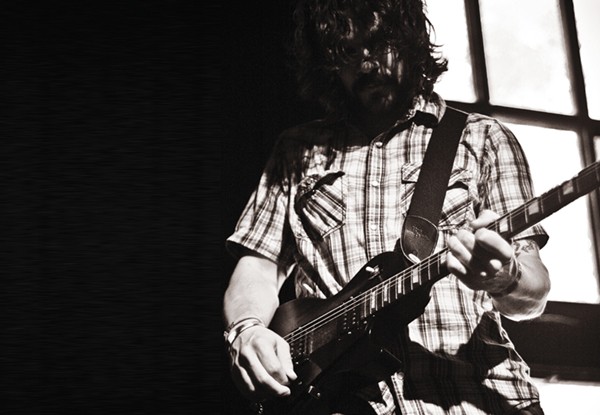 In the midst of the early-'90s Chicago indie-rock storm were a few special seedlings that sprouted from a suburban basement to form the band Cap'n Jazz. In the years since, they've somehow grown an illustrious family tree of independent musicians, sending out branches that include Joan of Arc, The Promise Ring, Make Believe and Owen.

Guitarist Victor Villarreal was just another late-'80s skater when he started playing with his friends down the street. How could he have ever foreseen just how many bands he and his teen-age cohorts had yet to beget — or the career twists and turns that would lead him from music to dog training and back to music?

Villarreal was always a virtuoso guitarist, but also a true mensch. As soft-shelled and down-to-earth as they come, he is the perfect magnet for all things enigmatic — bandmates included. Hence his ending up in Cap'n Jazz with childhood friend Tim Kinsella (who would go on to play with Joan of Arc, Owls, Make Believe, Friend/Enemy, Everyoned and Tim Kinsella(s)). Kinsella may have matured into one of indie rock's most indelible sojourner/songwriters, but high school was a different story.

"I met Tim when he was skateboarding outside this school for delinquent kids called ‘Jack London.' They had these cool steps that everyone would skate, so it was kind of like ‘the spot,'" Villarreal remembers. "Tim was supposed to meet some girl there and I guess she never showed up, so we ended up going back and hanging at his house."

When the two teens weren't skating, they were jamming in a subterranean skate-punk band called Toe Jam. "Tim wrote song lyrics about coffee and deodorant and I would just play really fast rhythms without pressing down on any strings," Villarreal says.

Behind the drum kit was a power-lifting football player whose father taught gym class at their high school. His aggression helped to keep the beats fast, yet it occasionally disrupted Toe Jam's practice sessions. "He would just freak out with these violent attacks," Villarreal recalls. Whenever the jock over-exerted his muscles during a song, "he would just start screaming and throw a bass drum or something and we'd all hit the deck."

Thankfully, the uber-physical drummer soon traded in his sticks for some cleats, and the rest of the gang joined forces with Kinsella's younger brother Mike (later of Joan of Arc, American Football, Owen) as a new experimental rock band called Cap'n Jazz. While often noisy and spastic, the band regularly oiled its sound engine with lithe melodies and dynamic time signatures.

Villarreal's fine-spun approach blended elements of bluegrass, post-punk, acid jazz and Spanish classical guitar, among other styles. Yet he could still lay down some highly combustible licks before sliding back into the pocket, navigating the switchbacks with telepathic assistance from bassist Sam Zurick (later of Joan of Arc, Ghosts & Vodka, Owls, Make Believe).

But these two weren't always such tight guitar brothers.

"He stole my skateboard when I was in junior high," Villarreal says, recalling their first encounter. "One day, I was skating outside this food-mart place when he came through with some other dude. I had my back turned and he just rolled by, grabbed my board and then rode off."

Such audacity made for an unlikely chemistry between the rock 'n' roll animals in Cap'n Jazz, and it sure took its toll on each beast. After recording two bewitching full-lengths with Ghosts and Vodka, and one spectacular record with Owls, Villarreal quit performing in 2002, whereupon he found solace in the comfort of other animals.

"I love working with dogs. I really understand them and they seem to understand me pretty well," he says. Drawing on his job experience as a kennel attendant at an animal hospital, the guitarist began hitting the local library, researching every last corner of the dog universe.

While the other guys tallied on as Joan of Arc, Villarreal started Everything Canine, a dog-training program. "I decided to, I guess, try something new and create my own 10-day training program, like basic training for puppies with no direction, or the dogs whose owners are clueless, too."

He is no stranger to challenges, especially when you consider the pudding-proof guitar parts he wrote into every Owls song. So who would be surprised that this lead guitarist-turned-dog-trainer would, once again, be transformed anew?

After scratching a seven-year itch to pursue other passions, Villarreal returned to the music world in 2009 with Alive, a therapeutic, self-released solo recording. "It was intended to be a gift for my family after my brother passed away," he says. "I guess the inspiration was, really, to try to comfort them."

His second solo release, Invisible Cinema, issued last month, is an astute yet playful mood-piece. By simply reflecting upon the everyday infinitesimal, Villarreal has birthed an instrumental album that keeps good company with its lyrics.

"I think of the whole solo thing as more of an opportunity for me to stretch myself and accomplish new things," he says. "I feel like it's making me a better musician."

Villarreal may seldom gaze back upon the tree of life that is Cap'n Jazz, but that's just because he's too busy planting new seeds.