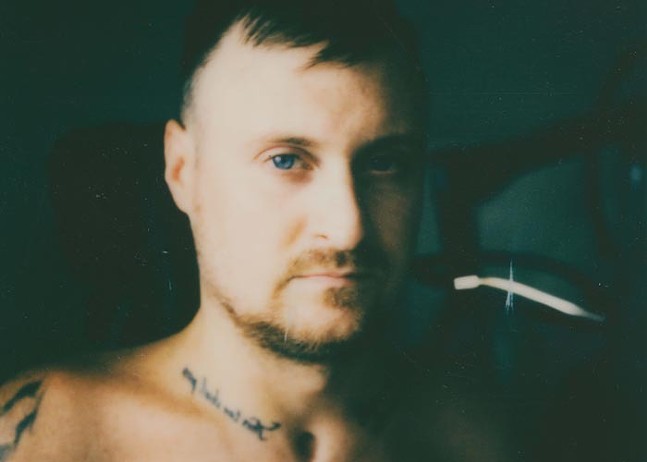 Photo: Robert Coombs/Courtesy of Vestige Concept Gallery
Photographer Robert Coombs
In 2009, artist Robert Coombs sustained a spinal cord injury after a trampoline accident. As a result, he became what’s described in the medical community as a C4-C5 quadriplegic — paralyzed in his legs, torso, and hands. Despite being unable to hold a camera — one review describes how he uses a wheelchair and controls his digital camera with a joystick operated by his mouth — Coombs continued his photographic practice and has since become celebrated for exploring the intersections of disability and sexuality.

Coombs will show in Pittsburgh for the first time with The Tropic of Color, an exhibition at Vestige Concept Gallery in Lawrenceville. The displayed works — on view Sat., Aug. 7-Sun., Aug. 29 — will draw from a series called Bobby's Boys, described in a press release as featuring Coombs’ friends and lovers, and “exploring what it means for a gay disabled man to photograph able-bodied and disabled people.”

Overall, The Tropic of Color will include 30 artists of different backgrounds and disciplines. It also celebrates “the various influences of tropical ambiance, landscape, and culture in art,” with Coombs, who lives in Miami, posing his subjects against a warm, conventionally sexy, beachy backdrop.

Kelsey Dennis, media director for Vestige, says the gallery team discovered Coombs through NY Magazine senior art critic Jerry Saltz, who called the photographer “one of the most radically original and convincing new artists to emerge in some time.” She adds that they “became interested in his art, activism, and breaking of boundaries.”

“We chose to highlight Coombs because we believe his work is compelling, important, and needs to be seen,” says Dennis. “His unapologetic, sex-positive photographs are breaking ‘taboo’ by depicting people with disabilities as sexual beings with feelings, desires, and fantasies.”

A press release says that through his "photographic examinations of relationships, caregiving, fetish, and sex," Coombs is “changing the narrative revolving around a community historically plagued by stigma, limited representation, and inadequate resources in relation to sexuality.”

“During this exhibit, we were learning a lot about the lengths photographers will go to for an image. In a sense, we were searching for photography at the edge: pushing boundaries in how the photography was shot, and the images that were being captured,” says Dennis.