“We started making pickles for ourselves.” 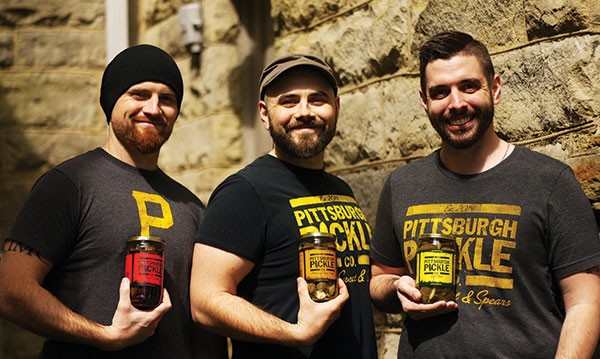 By November, Pittsburgh Pickle Company will have moved production from the kitchen facilities of a Verona church to the former Victor Ravioli Company building, about a half-mile away. That commercial space has a storefront which owners (and brothers) John Patterson, Will Patterson and Joey Robl hope to turn into a deli.

Not bad for a company that started almost by accident. When the brothers opened their other business, The Beerhive, in the Strip District, they knew they wanted to serve fried pickles.

But none of the pickles they found were quite right. “We started making pickles for ourselves,” John Patterson says. “The response was really great. People kept urging us to jar them. We saw potential for that business and it just kind of blossomed.”

Pittsburgh Pickle Company officially launched in summer 2014, and has since sold approximately 30,000 jars. As for why the product has been a hit, Patterson notes that the pickles are vinegary rather than salt-heavy, which keeps them crisp, and free from the artificial preservatives used in other brands.

Plus, the company’s serendipitous beginnings offer a certain freedom. “Since we didn’t [start out using] a 100-year-old family recipe,” he says, “we weren’t confined to the conventional rules of pickle-making.”

What type of pickle are you?