It’s been some time since I’ve had such a flat-out blast at the theater. 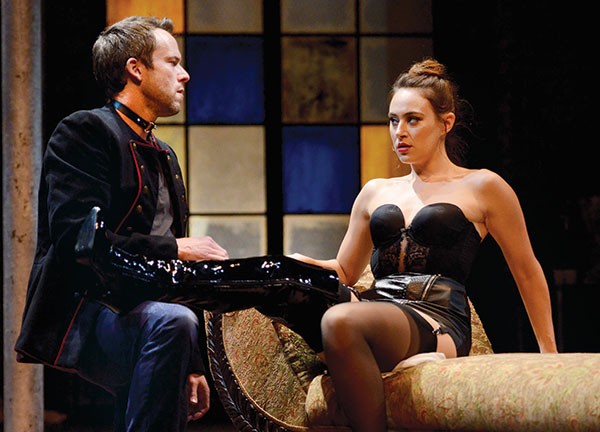 Let’s try that again with fewer adjectives. This 2010 show, written by David Ives, concerns a “visionary” director, Thomas, who has adapted the novella Venus in Furs and is trying to cast the lead. With a clap of thunder, a completely wrong-for-the-part actress, Vanda, bursts into the audition room several hours late and begs Thomas to let her read. He humors her, but his condescension evaporates when he discovers she’s frighteningly perfect. The play we watch is 90 intermissionless minutes of Thomas and Vanda reading through the play he’s written. The result is a cage match.

The novel, you see, is from Leopold von Sacher-Masoch (whose proclivities gave us the term “masochist”) and it’s about a man enthralled by a woman whom he manipulates into beating and subjugating him. The power struggle of the play-within-the-play becomes the same dance of dominion between Thomas and Vanda in the audition/read-through; who wins remains unclear until the end.

What I loved about Venus is Fur is that (its 2013 film adaptation notwithstanding) it could really reach its fullest expression only on stage; the shifting of tone, style and even reality couldn’t be expressed in any other medium. Ives knows precisely how to play with stage time and space and has created this unbelievably entertaining ride through a theatrical fun house. It’s been some time since I’ve had such a flat-out blast at the theater.

And that’s thanks to this perfect Public production, directed by Jesse Berger. Here’s a show that must be played beat by beat, and though Berger does that ruthlessly he never loses sight of the script’s spine and structure.

The whole enterprise, however, seems to have been created specifically so that Whitney Maris Brown and Christian Conn could play Vanda and Thomas. While Vanda is certainly the showier role — and Brown is absolutely mesmerizing — Conn is every bit her match, and this production hits stratospheric heights when these two meet center-stage and perform the living daylights out of this dazzling play.