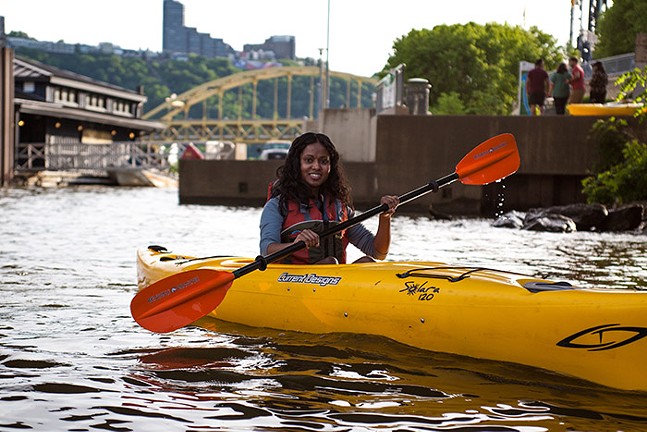 The festival starts with a sunrise paddle on the Allegheny River, followed by dozens of other events, including outdoor chess, hiking, and even poetry among more than 30 pop-up events across the region. It’s all meant to celebrate the organization’s 20th year anniversary, and to remind Pittsburghers just how far the region has come in terms of exploiting its natural beauty.

“Even 20 years ago, it was not prevalent,” says Beichner of Pittsburgh’s desire for outdoor recreation in nature. “People used to say, ‘Pittsburgh is hell with the lid taken off.’ People were still struggling to realize the region’s potential.”

That has changed now, and it’s becoming commonplace to see Pittsburghers enjoying hiking on trails, biking throughout the city and suburbs, and even paddleboarding on the three rivers: the Allegheny, the Monongahela, and the Ohio. But this didn’t come from nowhere.

Venture Outdoors is far from the only organization in Pittsburgh to encourage and promote outdoor recreation, but they are one of the movement’s pioneers. Over the last 20 years, the group has been successful on multiple levels, but they are looking to the future, too. And one that is more inclusive and intentional about reaching out to people of color in Pittsburgh.

“We updated our mission statement within the last few years and it’s now ‘we remove barriers and create access to outdoor experiences,’” says Beichner. “That is our future.”

In 1991, Venture Outdoors was started by Mike and Darlene Schiller and was driven by a group of dedicated and passionate volunteers. “The first thing that we really have to acknowledge is that nothing would have started without the dedication of our volunteers,” says Beichner. From there, Venture Outdoors started to dedicate programs to making the outdoors more exciting, including being the first to offer kayak rentals near Downtown on the three rivers and at North Park lake in the suburbs. The group also used to have a climbing wall that would travel around to different locales just to get people jazzed about being outside.

Beichner says the mindset of the organization was about helping people in groups get into the outdoors safely, even if they didn’t know where to start before. And things have only taken off from there. Venture Outdoors has since grown into a fully staffed nonprofit and has run more than 800,000 events.

This energy didn’t stop during the pandemic, even though the nonprofit had to stop in-person events for some time, due to COVID restrictions. Beichner says her team transferred everything to virtual in a matter of weeks, and were mailing members kits and other activities to help them get outdoors, even if that just meant their front porch.

Moving forward, Venture Outdoors hopes to continue to expand, but in a more equitable fashion.

“When I was hired in 2019, it was really about taking a deep look at the organization and what we are going to look like in the next 20 years,” says Beichner. “We celebrate what we have done, but we are also looking at what we haven't done well, like serving the Black and Brown community.”

Venture Outdoors' new mission is to reach people of color in Pittsburgh and meet them where they are at, listen, and have intentionality with the new relationships they hope to form. The nonprofit has been working with several partners — like the Pittsburgh Parks Conservancy, Grow Pittsburgh, and Bike Pittsburgh — on an Outdoor Inclusion Coalition, which includes improving diversity within the organizations and outside them with events.

“It’s about hearing and listening. It is not about swooping in and saying ‘ta-da we are here,’” says Beichner. “I don’t pretend to have all the answers. I am doing a lot of learning with some amazing partners.”

Venture Outdoors hopes to have some of that new spirit on display at the Big Day Aht, complete with hikes, kayaking, urban jogs, classes on camping, and even an outdoor film screen at Carrie Furnaces as part of the Banff Centre Mountain Film Festival World Tour.

“People need the ability to get outdoors and get moving again,” says Beichner, noting the region’s success in vaccinating people. “We are fielding calls constantly, people are really anticipating getting back to the activities they enjoyed pre-COVID.”
Big Day Aht. 5 a.m.-10:30 p.m. Sat., June 5. Multiple locations. Prices vary. ventureoutdoors.org/bigdayaht