"These conspiracy theories keep themselves going when there is a strongman in power." 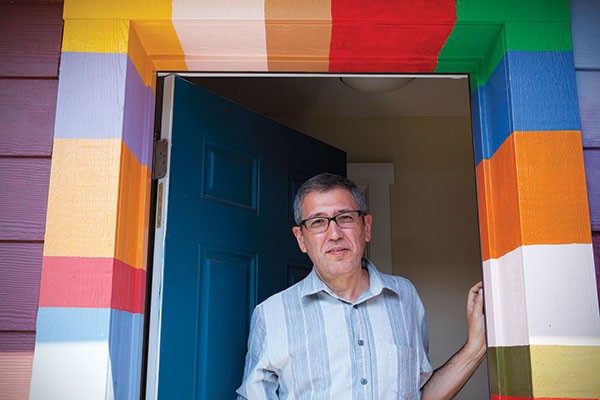 It was a case of life imitating art in the worst possible way.

In Venezuelan novelist Israel Centeno's thriller El Complot ("The Conspiracy"), a whole country descents into confusion, paranoia and violence — allegorized by an omnipresent fog over Caracas — after an assassination attempt on a militaristic president. A newspaper reporter discovers it was a plot by the president's own party to consolidate power.

As the book went to press in 2002, President Hugo Chávez was nearly ousted in a coup. In the subsequent political climate, Centeno says Chávez's supporters saw El Complot as a satire of the president and for the next seven years, he was the victim of threats, denouncements and a few suspicious street crimes. The confusion, paranoia and violence had jumped off the page.

Centeno, born in 1958, has published 14 books; in 1991, he won Venezuela's National Council of Culture Award. But in 2011, Centeno and his wife and two daughters fled and gained permanent residency in the U.S. Since then, they have lived on the North Side, in a home provided by the nonprofit City of Asylum/Pittsburgh, which shelters writers persecuted in their home countries. In May, the group's publishing arm, Sampsonia Way, released an English translation of the novel that started this all. It was translated by Guillermo Parra, who facilitated Centeno's interview with CP.

Was El Complot meant to satirize the Chávez government?

The origin of the novel went beyond that. These conspiracy theories keep themselves going when there is a strongman in power. They will use assassination attempts against them as a way to consolidate their power. Hitler used the burning of the Reichstag to consolidate his power. The same with Joseph Stalin: He would claim members of his entourage he was trying to get rid of were trying to have him arrested. Another example is Fidel Castro in Cuba: He's claimed to have survived hundreds of assassination attempts over the years. When I was writing this book I was keeping some of these examples in mind.

You write extensively about the psychological effect of intimidation on the journalist, Manuela. Was this something you experienced before the book was published?

That experience of that character wasn't from me, but I was thinking about several women journalists in Caracas who were experiencing a lot of pressure at that time. ... There was an incident in which [Caracas newspaper] El Nacional's offices were being surrounded by Chavez supporters who threw Molotov cocktails. A journalist was brought into court and accused of being part of an assassination, even though she was just reporting on it.

Did you know the book would make you a target?

I was assuming, [because] as the book was going to press, there was a mini coup or absence of power. I knew tensions would

When did the threats begin?

A long time before I left. From 2003 to 2009, I lived an inner-exile. I would stay in my apartment, go hiking and teach writing workshops, but not really go out much. I felt like it was a process of becoming divorced from Venezuela.

What forms did these threats take?

There were letters from parents in very local newspapers trying to get one of my books taken out of the high school curriculum in Venezuela, and it was taken out. The second incident: I was coming back to my apartment from a writing workshop and, under the guise of it being common crime, this guy mugged me, beat me up, stabbed me in the arm and used some of the words that people were throwing at the opposition. That clued me in that it wasn't a normal robbery. One day, my mother got 80 phone calls saying they were going to cut off my head and put it in a bucket of shit.

Was moving to Pittsburgh an intense adjustment?

Pittsburgh is a very calm, tranquil city compared to Caracas. Sometimes, the silence of Pittsburgh torments me, though everyone on the North Side has treated me warmly. I was able to get my daughters here: That was my biggest success. One thing I do struggle with is becoming fluent in English. Because I am a writer, it is my job to be reading in Spanish, so I can't fully immerse myself in English or in Pittsburgh. But Pittsburgh has started to show up in three of my recent novels, including some of the Homestead strikes. This novel is a Sherlock Holmes-type mystery that takes place halfway in Caracas and halfway in Pittsburgh.

Do you see yourself ever returning to Venezuela?

I don't see any time in the near future it being safe. I'd rather focus on establishing the rest of my life in the U.S. It doesn't mean I am cutting ties with my country because I am writing about it. Literature will remain my tie to the country.