B52 was one of the first Pittsburgh restaurants to have an all-vegan menu. Owner Omar Abuhejleh, a former attorney and founder of Allegro Hearth Bakery in Squirrel Hill, opened the Mediterranean-inspired eatery in January 2016. Since then, other vegan spots like Apteka and Onion Maiden have made names for themselves on the vegan scene. But even as meatless menus flourish in the city, Pittsburghers keep returning to Abuhejleh’s simple, traditional dishes.

Abuhejleh’s menu fuses Mediterranean and American influences, pulling from his mother’s Palestinian background. His menu doesn’t scream vegan; there aren’t any bizarre substitutions or unpronounceable ingredients. It’s a commitment to health and heritage, comfort food that just happens to be vegan.

Inside, the cafe is a blend of cozy and chic. A few subtle details — the ornate ceiling, hanging plants, gorgeous light box chandeliers — stand out in the otherwise minimalist space. At the front, there’s a case full of takeaway dips and baked goods. B52 can be whatever you need it to be: a grab-n-go lunch spot, a midday caffeine stop, or a long, spread out, multiple-course dinner.

B52 is BYOB and makes up for the missing bar with a full bill of non-alcoholic drinks. The espresso menu lists well-crafted classics along with funky specialties like cinnamon rose lattes and cardamom nitro. In the basement, the cafe ferments kombucha, which makes appearances throughout the menu. Housemade sodas are a regular feature; the eatery’s blood orange and basil soda rivals any good cocktail.

The eatery is open from early morning to evening, and menus change as the day goes on. Breakfast and lunch cover one list, including items like toast and pancakes with savory sandwiches, salads, and mezze (a sampler plates of traditional Mediterranean dips and bites). At dinner, the menu is smaller, with entrees such as kabob and moghrabieh (Lebanese couscous).

I started out with a simple toast covered in cashew cheese with raspberry preserves. Even in such a basic dish, Abuhejleh’s dexterity with plant-based ingredients was clear. The bread, from Allegro Hearth Bakery, was thick and springy. A smear of housemade cashew cheese was sweet and tangy, any grit from the ground nuts masked by jam.

Latkes were boosted with carrots and onions, paired with the restaurant’s homemade lemon and garlic tahini. A seitan shawarma, wrapped up with romaine and onion, was smartly paired with pickled radishes and pickles. 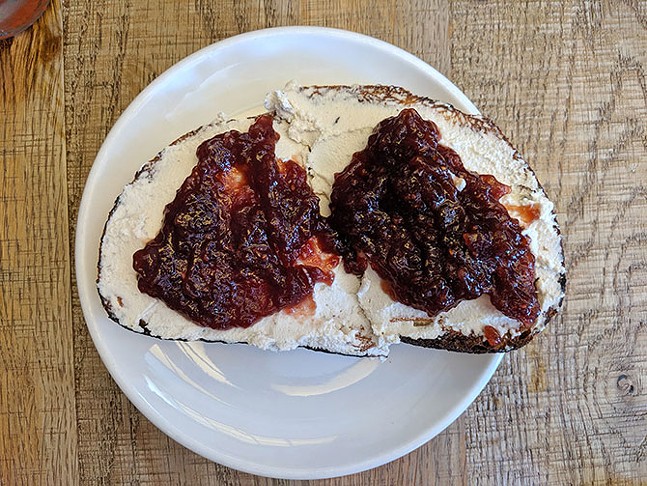 Seitan is all over the menu. The meat substitute, made from wheat gluten, is a hard flavor to hide. It’s one of my biggest issues with fake meat; often, it skews the entire taste of a dish.

Abuhejleh’s dishes didn’t have this problem. In his kofta tofu scramble, the seitan was barely detectable. The dish, made from tofu (crumbled to look like scrambled eggs), kale, crispy pita, harissa, and kofta seitan, was superb. Abuhejleh created the perfect blend of spices to give the meat substitute a deep, earthy flavor. He was able to transform two staples of the vegan diet — tofu and protein substitutes — into a flavor-rich, homey representation of traditional Mediterranean cuisine.

What’s better than half off drinks? Nine dollar scrambles and pancakes!

No, the name isn’t in reference to “Love Shack.” The cafe sits at the edge of Butler and 52nd Street.